Bookshelf twitter
Follow @bookshelfnews
RT @cibabooks: As if there weren’t enough reasons to #ShopLocal, here is one more: our #CIBD2021 Contest for Book Lovers! Ever dre… t.co/0YUVShFXip


RT @cibabooks: Was there ever a better time to #ShowTheLove to indie bookstores? 🧡 Thank you to everyone who sent in their love no… t.co/wLVW19fCJ2 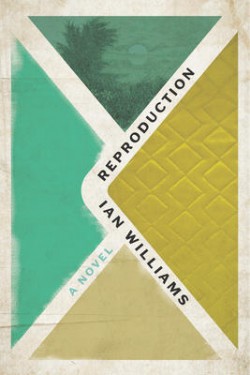 The Bookshelf's 12 books of Christmas starts TODAY! Each day, a new book will be featured and available in-store only at 20% off!

About the book from the publisher Knopf Random Vintage Canada:

A hilarious, surprising and poignant love story about the way families are invented, told with the savvy of a Zadie Smith and with an inventiveness all Ian Williams' own, Reproduction bangs lives together in a polyglot suburb of Toronto. Felicia and Edgar meet as their mothers are dying. Felicia, a teen from an island nation, and Edgar, the lazy heir of a wealthy German family, come together only because their mothers share a hospital room. When Felicia's mother dies and Edgar's "Mutter" does not, Felicia drops out of high school and takes a job as Mutter's caregiver. While Felicia and Edgar don't quite understand each other, and Felicia recognizes that Edgar is selfish, arrogant, and often unkind, they form a bond built on grief (and proximity) that results in the birth of a son Felicia calls Armistice. Or Army, for short. Some years later, Felicia and Army (now 14) are living in the basement of a home owned by Oliver, a divorced man of Portuguese descent who has two kids--the teenaged Heather and the odd little Hendrix. Along with Felicia and Army, they form an unconventional family, except that Army wants to sleep with Heather, and Oliver wants to kill Army. Then Army's fascination with his absent father--and his absent father's money--begins to grow as odd gifts from Edgar begin to show up. And Felicia feels Edgar's unwelcome shadow looming over them. A brutal assault, a mortal disease, a death, and a birth reshuffle this group of people again to form another version of the family. Reproduction is a profoundly insightful exploration of the bizarre ways people become bonded that insists that family isn't a matter of blood.

Biographical Note:
IAN WILLIAMS is the author of Personals, shortlisted for the Griffin Poetry Prize and the Robert Kroetsch Poetry Book Award; Not Anyone's Anything, winner of the Danuta Gleed Literary Award for the best first collection of short fiction in Canada; and You Know Who You Are, a finalist for the ReLit Prize for poetry. He was named as one of ten Canadian writers to watch by CBC. Williams completed his Ph.D. in English at the University of Toronto, mentored by George Elliot Clarke, and is currently an assistant professor of poetry in the Creative Writing program at the University of British Columbia. He was the 2014-2015 Canadian Writer-in-Residence for the University of Calgary's Distinguished Writers Programme. He has held fellowships or residencies from the Banff Center, Vermont Studio Center, Cave Canem, Kimmel Harding Nelson Center for the Arts, and Palazzo Rinaldi in Italy. He was also a scholar at the National Humanities Center Summer Institute for Literary Study and is a judge for the 2018 Griffin prize. His writing has appeared in several North American journals and anthologies.