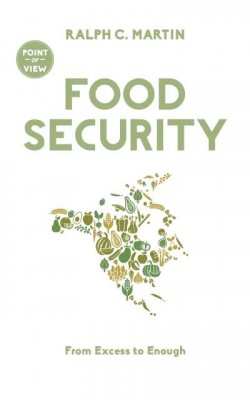 Ralph Martin’s Food Security is just the latest in a wonderful season of books published by local writers. Ralph is a professor of plant agriculture at The University of Guelph. He also founded the Organic Agricultural Centre of Canada and, from 2011 to 2016, served as the Loblaw Chair in Sustainable Food Production. All his life’s later work was reinforced by the experience that he gathered growing up on a farm in Wellington County.

Food Security is an engaging and important book which covers many intertwining issues. Although Ralph adheres to Michael Pollan’s dictum eat food, not too much, mostly plants, he goes far beyond lifestyle philosophies and into the realms of food waste, soil integrity, transportation and its large carbon footprint, corporate farming and its insidious hold on food production, big name food producers which addict eaters to their overly processed products and, of course, seed, pesticide and herbicide monopolists which strangle farmers through higher costs and marketing deceit.

It’s hard not to rant after reading Food Security, but there’s so much that is informative and goes beyond rant. Here’s just one example of something that I learned. It seems that grass-fed cattle are not as bad for the environment as we would think. Farmers need to rotate their crops to avert soil depletion and land planted for forage helps reinvigorate the soil. So it goes something like this: Foraged land recovers nutrients that are not captured by cash crops. Therefore, plant grass or clover which humans do not eat, but cows do. Manure also fertilizes. This is called sustainability.

Ralph also feels that farmers should be rewarded for producing animal products with human inedible feed only. Food economics should be taught starting in public school, where a respect for farmers would be engendered. There are many instances like these where Ralph analyses a problem and provides solutions.

I am very proud of my sister. She has been an organic farmer for 40 years. I know that she has often been frustrated and hurt by how little respect many give to the people who actually keep us alive. Ralph’s ideas can go a long way to enlightening and educating.

Ralph will be speaking about his book at The Bookshelf eBar on Tuesday December 10 at 7 p.m. Tickets available in the bookstore or at the door.