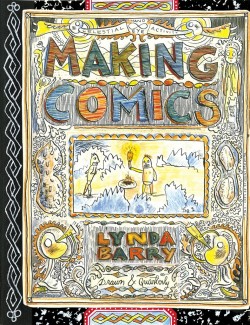 Making Comics
Syllabus: Notes From an Accidental Professor
"How old do you have to be to make a bad drawing?" asks Lynda Berry at the outset of Making Comics, the home version of her Comics Class.
It's an odd thought--more marginalia, really. But it's also a sort of trick question. What is a bad drawing? Who decides what a bad drawing is? What the hell is a good drawing? The question might be re-phrased as "How old are you when you begin to divide drawing into 'good' and 'bad'?"
Making Comics, a sort of sequel to Barry's Syllabus: Notes From an Accidental Professor, is chockablock with "bad drawings." Stick figures and squiggles and shapes that could only produce monsters. Is a drawing bad when it doesn't look like what it's supposed to? But what if a drawing isn't supposed to be anything? What if a drawing produces meaning, as opposed to be being the product of meaning?
In Barry's Comics Class, it's "not about developing characters. It's about waiting to see who shows up in certain circumstances." It's about re-learning how to draw with a pre-good/bad mindset, how to be alive and aware in the world in such a way that the division between being and creating fades.
"Everything we have come to call the arts seems to be in almost every 3-year-old. When these capacities are absent in a young child we worry about them. There seems to be an understanding that the thing we call the arts has such a critical function for kids, though we may have a hard time saying just what it is, especially if we call it 'art' -- but 'it' existed before the word for it existed."
Over three sections--Are You My Monster, Character Jam, and Story Time--Barry, a recent recipient of the MacArthur Fellowship, lays out exercises and assignments that serve to reconnect ones art-making instinct to that prelapsarian state and gradually apply the impulse to more intentional work. It's a process that's suited to anyone at any point of prowess.
Making Comics, in the end, answers the question it didn't exactly ask. The only bad drawing is, if drawing is what you want to do, is no drawing at all.
Go To Reviews