RT @StephsBite: Trying something new whilst supporting a much valued local business here in #Guelph. Thank you, @Bookshelfnews !… t.co/MmgbEbKBs0


RT @GuelphTheatre: We are excited for the upcoming 'Useful Information', our 4th of 4 vignettes for Café Conversations & Guelph Little… t.co/1uPDFMG9fA

ROBYN DOOLITTLE IN THE EBAR 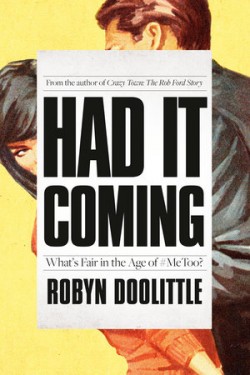 Had It Coming: What's Fair in the Age of #MeToo?
Had it Coming w. Author Robyn Doolittle

We are so grateful to have Robyn Doolittle join us on Tuesday November 19 at 7 p.m. in the eBar.

Presently, Robyn is an investigative reporter for the Globe and Mail, but her exposé of Rob Ford for the Toronto Star was a crucial force in the unmasking of Ford’s under life. She was awarded the Kobo Emerging Writer Prize for Crazy Town: The Rob Ford Story. Her recent series Unfounded has won many awards and forced a reassessment of police policy around sexual assault across Canada. She was named Journalist of the year in 2017 at the National Newspaper Awards.

Robyn’s news book, Had It Coming: What’s Fair in the Age of #MeToo?, is, on the surface, pretty self-explanatory. But after reading it I have learned how much has changed since I was a young woman in the late 60’s and 70’s and, of course, how much change still has to happen.

She had it coming was a phrase I heard often in my teens. In many ways, I am sure, I integrated this attitude as I acted in the world. The word slut was hurled at some young girls constantly and although I was never able to even say the word, somehow I looked at these marked women differently. With the consciousness-raising of the 70’s, the word was appropriated by the women's movement. It was barely used and, if so, with sarcasm. Today, the Slut Walk (which was started by a former Bookshelf employee) is a rallying event for many young and older feminists around the world. But, as Doolittle can attest, sometimes the more things change, the more they remain the same.

In Had It Coming, Robyn also reveals the ways in which she herself upheld (in small ways) rape culture, which she describes as “baseless suspicion, sympathetic press coverage, slut shaming and a cavalier attitude of police and the courts.” She has dug deep into many case files, interviewed many victims and members of the judiciary and law enforcement. But she also discusses a number of great initiatives aimed at bringing common understanding to people of all sexual orientation to the large question of what consent looks and sounds like. Some of the work being done in some post-secondary school settings is very inspiring. It gives me hope.

Everyone is welcome to Robyn’s book launch. Tickets are available in the bookstore and at the door.