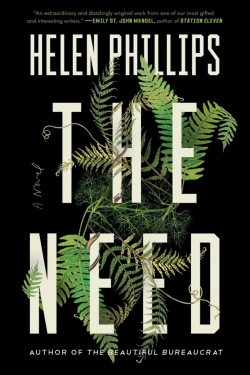 The Need
Helen Philips's page-turner The Need begins with the oscillation between the two lives of Molly, a mother of two: Molly at home and Molly at work.

At work, Molly is crouched in The Pit, her "freak focus," as her husband calls it. A fossil quarry thirty yards from a defunct gas station, The Pit has been yielding "almost a decade of mind-bending plant-fossil finds, a bunch of them unplaceable based on our current understanding of the fossil record," but no one besides a handful of "paleobotany dorks" took much notice until the The Pit began to yield other artifacts that were slightly incongruous with our reality.

At home, Molly is crouched in her bedroom, clinging to her children. "The baby in her right arm, the child in her left." Home alone, her husband on a last-minute business trip, she heard footsteps in the living room. Or thought she did. "Or was it a soft hiccup from Ben? Or was it her own knee joint cracking beneath thirty-six pounds of Viv?"


Soon after Viv's birth, Molly found herself plagued by "minor disorientations," "small errors of eyes and ears." "A brief flash of dizziness that, for a millisecond, caused reality to shimmer or waver or disintegrate." Her husband chalked up to sleep deprivation or dehydration. She found stability at work, but then these postpartum anomalies began to take form in objects she was excavating from The Pit. And now there's someone in her house.

The Need takes place in the hallucinogenic mush-brain of overloaded motherhood. The constant collision of the modern demands of dual lives with primal maternal instincts, the making literal of the split lives of working mothers, makes Phillip's novel both horribly real and horribly surreal.
Go To Page Turners & Pot Boilers