Bookshelf twitter
Follow @bookshelfnews
Thanks for being here! Pick up your copy of #FailurewithoutFear available in the Bookshelf bookstore… t.co/tij4BSfa8Q


RT @ShekillsLit: We'll be partying #CandaceStarr style at the eBar Feb 20th to celebrate the release of my tongue-in-cheek noir, The… t.co/RQRdRpBr1k

REVIEW: AGENT RUNNING IN THE FIELD 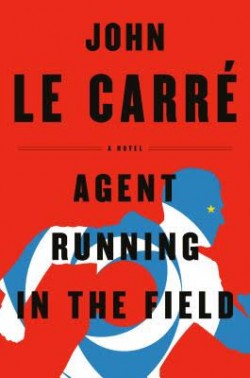 So intrigued am I by the secret services of the world that I actually watched all of the congressional testimony given by Michael McGuire regarding Donald Trump’s communication with the Ukrainian President Volodymyr  Zelensky.  Throughout the testimony, McGuire, the Acting Director of National Intelligence, tried to exculpate himself and others to the best of his ability. He was really squirming. It could have been a scene from a John le Carré novel.

In the 50s and 60s, le Carré worked at both MI5 and MI6 and so understands the warren of competing security services, the egos who live by rules and hierarchy, and the ridiculous decisions made by those at the top of the pecking order. It’s all been fodder for 25 brilliant spy novels.

Agent Running in the Field is his 25th. There is a great double entendre in the title. Yes, agents run around, often being chased, but agents also run others who have come over to their side and deliver valuable information from their home country. “Running” an “asset” is an all-encompassing job. You virtually become the spy’s parent, monitoring everything they do, making sure that they feel safe, and most importantly, scrutinizing them constantly for any hint that they may be a double agent.

Agent Running in the Field takes place in almost real time. Britain is riding the rollercoaster of Brexit.  In a recent interview le Carré has described Prime Minister Boris Johnson and his cabinet as children and further describes Johnson as a man totally without principle. They are the backdrop of this story which is embedded in an era of lying, opinion manipulation and burgeoning authoritarianism. The book will be released October 22, nine days before Britain is scheduled to leave the European Union. This is probably not accidental.

Nat, our hero, has just been brought home after many diplomatic (read spy) postings around the world. He’s burning with anger about Brexit and wondering about retiring. He is hoping that this might be a good time to patch up his marriage with his wife, a lawyer for left wing causes. He’s also planning on playing a lot of badminton at his club. Badminton is his salvation and he’s good at it but it has also been a crucial tool in his spy game for years.

But Nat is talked into coming back into the fold and, in a technique rarely used in the world of thriller writing, the end of the tale is set up in the first sentence. “Our meeting was not contrived. Not by me, not by Ed, not by any of the hidden hands supposedly pulling at his strings.” We’re right there with Nat, as he succumbs to duty again and unspools the etiology of the spy chase.

Agent Running in the Field is such an elegant book. Le Carré’s prose slides down like a good scotch. He cleverly uses different tenses to pull you in and then push you out. This is a guy who knows how to create tension, as well as a damn good story. He’s 87 now, but let’s hope that he has another book or two left!