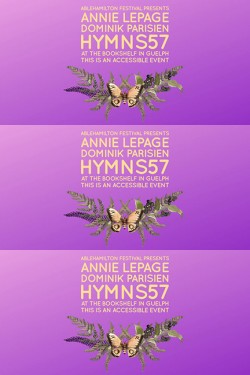 An afternoon of disability poetics starting with a live broadcast at 1:00pm with HYMNS57 on CFRU 93.3 FM. Tune in as Steven de Taeye (Hymns57) creates multilayered soundscapes based on DOMINIK PARISIEN and ANNIE LEPAGE’s poetry, followed by a reading at The Bookshelf in Guelph at 2:30pm on Thursday, October 24th.

Presented by the AbleHamilton Poetry Collective 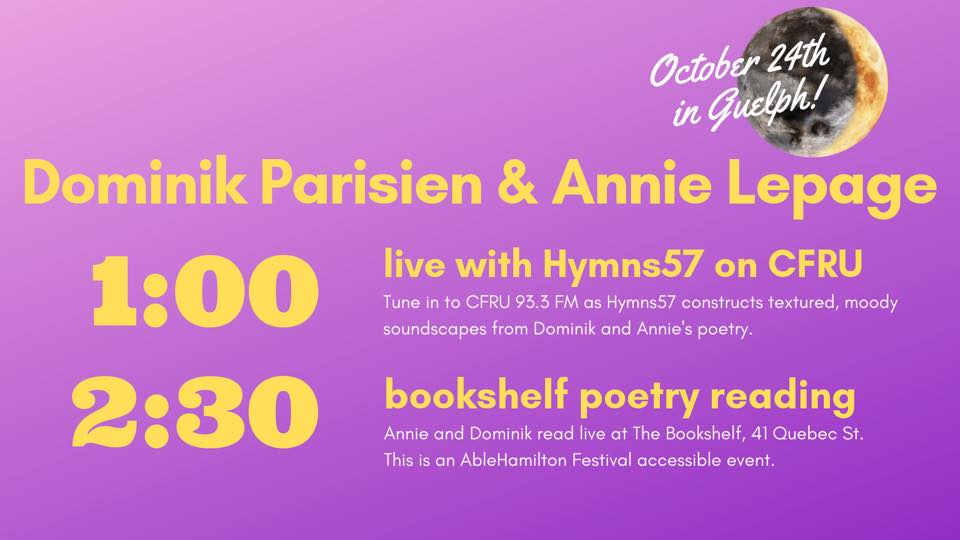 ANNIE LEPAGE —sometimes known as “notabeanie”—is a writer, artist, performer, and small-time internet persona, currently operating out of Guelph, Ontario. Their interest in invisible and contested disabilities is shaped by their own experiences of neuro- divergence and chronic pain. Annie’s various works can be found online at www.notabeanie.me. They also write and draw Moody Bluth: Anti-Neoliberal Sleuth, a comic about magic, mysteries, and just trying to get your paperwork sorted for the disability services centre. It is available for free with image descriptions at: MoodyBluthComic.com.

DOMINIK PARISIEN is a disabled, bisexual, French Canadian poet, writer, and editor. His work has appeared or is forthcoming in The Fiddlehead, Quill & Quire, Arc Poetry Magazine, The Antigonish Review, Plenitude, Wordgathering, as well as other magazines and journals. His poetry chapbook We, Old Young Ones was published by Frog Hollow Press through its Dis/Ability series.

Dominik is the 2019 Associate Program Editor for the FOLD (Festival of Literary Diversity). He is also the co-editor, with Navah Wolfe, of The Mythic Dream, Robots vs Fairies, and The Starlit Wood: New Fairy Tales, which won the Shirley Jackson Award and was nominated for the World Fantasy Award, the British Fantasy Award, and the Locus Award. His most recent editorial project is Disabled People Destroy Science Fiction, with Elsa Sjunneson-Henry.
Originally from Eastern Ontario, Dominik now lives in Toronto.

HYMNS57 is an uncompromising sound venture project, crafting hazy, disjointed tracks that have more to do with abstract memories at times than music. He's a local, social advocate and arbiter of ambient noise. Though it may sound like a lot of improvised tones, there's a deep humanity to his work. While working primarily with guitar and effects, Hymns57 often adopts field recording, found sound and samples to orchestrate a multivariate sonic landscape. Layers of carefully woven tape loops, made by hand, offer a temporary memory palace of unique textures that evoke a lingering nostalgia. A formula designed to immerse you into a dynamic audio experience. Hymns57 is also the host of CFRU 93.3fm's program Aural Tethers, which airs Friday evenings from 10pm to 1am. A broadcast of finely curated ambient terrain that weaves it's way through experimental tapestry and beyond. Customized to lead your ears astray.

The Bookshelf is wheelchair accessible.