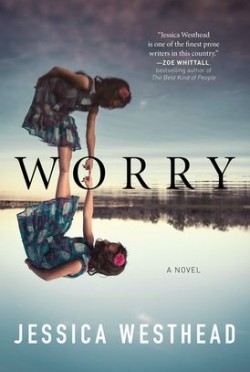 Sometimes it feels as though my attention, the force and thoroughness of it, is all that’s holding the world together. To let my guard down would be to turn off some causal gravity, unmooring everything and sending it drifting into oblivion.

I’m a worrier. Me and other worriers aren’t necessarily not the reason that the worst things you could possibly imagine aren’t constantly happening.

Ruth is also a worrier. For instance, she’s never without her well-stocked parental “bug-out bag.” Its presence and heft makes it a sort of sibling to her almost-four-year-old daughter, Fern. Though her husband stays behind to continue unpacking in their new house, when Ruth accepts an invitation to her childhood best friend Stef’s cottage, the pack certainly comes along. Ruth literally and figuratively brings her baggage along for the weekend because, for a worrier, there’s no such thing as leaving your worries behind.

Worrying can be an attempt to exert control over the unreliability of daily life, or at least to close off all the exits so things can’t get too far out of hand. At the lavish lakeside cottage, though, Ruth’s at the whim of Stef’s carefree—sometimes careless—attitude. Getting away from it all means exposing Fern to the bad TV and bad food and bad behaviour and bad who-knows-what-else that she otherwise strives to protect her from. With Fern at the age where she’s just starting getting big enough to see over the fence that Ruth’s built around her, the little boost of Stef’s Way risks allowing her to make a break for it.

When they first arrive, Ruth and Fern are left waiting for Stef and the rest of the family to show. Their car is in the driveway, but there’s no sign of them. As mother and daughter bake in the sun, waiting, a man appears on the lake, paddle-boarding toward them. Fern, even though she’s been warned countless times about talking to strangers, tugs at her tether and strikes up a conversation.

The man turns out to just be Marvin, a gregarious neighbour who’s come to report that Stef and her brood have taken a boat ride. “Stef’s in the lake,” he casually assures Ruth, bringing to the worrier’s mind images of her friend, drowned, “long strands of blonde hair like seaweed, drifting.”

Less than ten minutes later, Stef and her lot arrive. Everything’s fine. But the unsteadiness, tension, and mistrust of Ruth’s initial worry lingres like a ringing in her ears--and a ring in the reader's ear--which becomes an insidious hum that carries on as everything continues to be seemingly fine.

Jessica Westhead does as a writer what the best worrier is able to do: make you doubt your own sense of safety, compromise even the simplest, sturdiest-seeming structure with “but what ifs,” convinces you that all it takes is turning away for an instant for everything to go flying off into space. It’s an influence that, exerted deftly, makes you reconsider your own compass. Worry, on the surface, is a simple story. But any worrier will tell you that the surface of things is not to be trusted.

Of course there’s a comfort to worry. It’s the comfort of attentiveness that verges on augury: you predict the worst thing and either enjoy the reflief of things turning out okay, or you get proven right--your worry validated. Becuase the worst things happen all the time, and they usually happen when you’ve stopped paying attention for just an instant.