The Greenroom Kitchen Tuesday- Saturday Opens at 5pm Order from the menu, get a cinema seat saver.… t.co/3cKSeUqy9m


Book Launch with @ShekillsLit in the @eBarguelph on Feb 20, 7pm! Reading, Q&A, appetizers, book signing and one tou… t.co/5ZOA6AEFKL 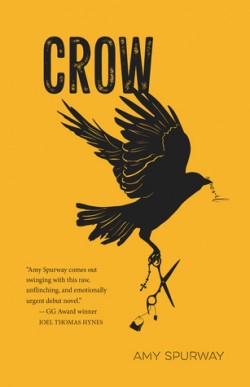 Crow
Nicknames are how other people see us. They are unauthorized biographies, the amber in which fleeting ignominies can get trapped. They refer to parts of our selves and our life, not the whole. We rarely have the luxury of nicknaming ourselves.

Amy Spurway's Crow is rich with sobriquets. Its cast of characters includes the likes of Willy Gimp, Duke the Puke, and Becky Chickenshit. And of course there's the titular Crow, FKA Stacey Fortune. The three tumors that send Crow home to rural Cape Breton for what she believes will be a palliative visit also get nicknames: Parry Homunculus, Ziggy Stardust, and Fuzzy Wuzzy.

"Hihowareyatoday," runs one of Stacey's many introductions to what she considers her final account. She's come up with so many different version of herself in her life, it's initially difficult to find the correct one to tell her own, all encompassing story. "Up until two weeks ago, I was the picture of a strong, successful, independent urbanite woman. I had a mediocre career, an overpriced condo in downtown Toronto, and an hilarious story about how I empowered myself to blow gobs of money on stupid shit in the name of retail therapy after I gave my cheating fiancé the boot... Now, I'm holed up in my mother's small and scruffy tailer on small and scruffy Cape Breton Island, holding out little hope that the doctors in this Have-Not Hellhole can do much to stop me from morphing into a paralyzed bag of piss, drool, and babble before I unceremoniously croak."

Everything that Crow had tried to run away from years ago is waiting for her when she returns. "Crow," the appellation that she felt would pigeonhole her he whole life, is waiting there for her. Every person she wanted to seperate herself from remains. No one has changed. While Stacey was in Toronto, trying establish an opposite life to the one of her childhood, everyone at home was becoming--for better or worse--more staunchly and profoundly the same person they've always been. Turns out, to her intitial shock, Crow's mostly unchanged, too.

Spurway's debut novel, by turns mean, and loving, and sad, and hilarious, asks the essentially Canadian question of "Who do you think you are?" In place of the tall poppy landscaping that usually rules homecoming stories, though, Crow makes for a hard, thoughtful consideration of how elusive we can be to ourselves. The ideas we have of who we are can be as ill-informed and wrongheaded as the ideas others have of us. As Stacey "Crow" Fortune, along with Parry, Ziggy, and Fuzzy, returns for a final reckoning, a final assessment, she has to take into account that  sometimes the community we resent most knows us best. The people of this Have-Not Hellhole know Stacey, and they know her as "Crow."
See Amy Spurway read from Crow at the Eden Mills Writers' Fest on Sunday September 8, 12 - 6pm. Tickets available in The Bookstore! Check out the schedule HERE
Go To Literary