RT @MikeSchreiner: Great job @globalecochange on @TheAgenda this week talking about the delay of your book launch due to Covid-19. I l… t.co/loOlHrhDvM


RT @BeyondStayGold: Thanks @Bookshelfnews for sourcing delivering this #Supernatural read yesterday. Sometimes you have to have be pati… t.co/Fut95gXoDI 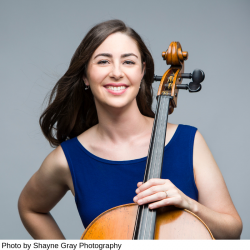 Sound Mind: My Bipolar Journey from Chaos to Composure

The tortured artist archetype is a pervasive one. So many celebrated creators have grappled with a mood disorder of some kind that an entire Wikipedia page is dedicated to the correlation between "Creativity and Mental Illness;" the misdrawn conclusion being that one aspect of an artist's personality must directly flow from the other.

The mythology surrounding art and suffering played no small role in preventing cellist Erika Nielsen from seeing the true nature of her mental health. Erika spent her teenage years and young adulthood oscillating between nightmarish depressions and periods of unprecedented elation. It was during one of her "good moods" that she approached a therapist with the hope of getting to the bottom of her depressive episodes; the result was a diagnosis of  bipolar disorder at the age of 27.

The Bookshelf hosted Erika in the Ebar on June 28th, and I had the pleasure of speaking to her about her first book, Sound Mind: My Bipolar Journey from Chaos to Composure. The book is both a memoir and a self care guide for the newly or undiagnosed and those who want to support them.