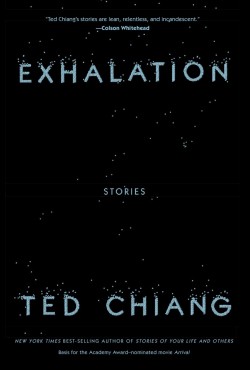 Ted Chiang's new collection, Exhalation, comes seemingly on the heels of the boffo, elegant adaptation of his palindromic story "Story of Your Life."

For many readers, myself included, Arrival was an introduction to Chiang, who had been an underground star of the science fiction world since "Tower of Babylon," his first published story, won the Nebula Award in 1990. His first decade's worth of output was collected in 2002 as Stories of Your Life and Others, reissued and retitled coincide with the release of Arrival in 2016. We new initiates have had to patiently wait two long years to get our hands on a new batch of hard-but-philosophical sci-fi, which is nothing compared to the nearly-twenty years that early adopters have been waiting.

However long you've had to wait, the wait for Exhalation was worth it.

While Denis Villeneuve's movie still managed to pull off heart-/headfuck twist of "Story of Your Life," its source material was unrivalled. If you stopped at the movie, you missed out. The story turned the first-contact scenario on its head, with visitors from another world bringing humanity not some technology of either survival or destruction, but rather perception. A visual medium could only just graze a story about language as technology. If the story was indeed your introduction to Chiang, it's a prime example of what's so special about Chiang's fiction.

Other than whatever senses we were born with and have held onto, we tend to forget that our reality is otherwise mediated through one technology or another, language chief among them. Tech is often treated as something that's beyond us, apart from us, a way of escaping ourselves, but for Chiang, advanced gadgetry is often a means of extending some essential part of ourselves into the world, as much to understand the without as the within.

In Exhalation, Chiang is especially interested in the notion of free will, in the forces without and within that we can't help but take for granted, but are ultimately ruled by. A cocktail of evolution, genetics, and rearing reveal to us a program that we're by and large ignorant of, much in the same way that we're by and large ignorant to our enthralment to language.

In the titular story, a scientist of indeterminate origins, unable to find any willing guinea pigs, opens up his own body and makes a landmark discovery about his design and its relation to his world's atmosphere. In the layered Arabian Nights-like opening story, a portal found a market shop challenges anyone to who goes through it to question the bearing that individual decisions have on the outcome of their lives. The novella at the centre of the collection explores the courses and consequences for raising AI that we expect to be like us, but not us.

The care, curiosity, and nuance that energies these stories justify their nearly 20-year incubation period. Sci-fi devotees are no doubt cheering the long-awaited appearance of new work from Chiang, but I'd also push the book onto fans of George Saunders. In terms of wait and weight, Exhalation might be comparable to Saunders' Tenth of December, which was an excruciating seven year wait, and has a similar philosophical, inward looking relationship to technology. While Chiang might not have the humour of Saunders, he's got thoughtfulness and heart to spare. He's a party that there's no such thing as being too late for.