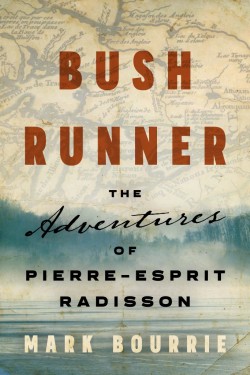 Bush Runner: The Life and Times of Pierre-Esprit Radisson

Pierre-Esprit Radisson, whose name was appropriated by a hotel chain, was considered an explorer, but never discovered anything.

Sometimes credited with founding the Hudson’s Bay Company, at the end of his life Radisson had to sue for a paltry bit of money to keep him from the poor house. He was a salesman who lugged pots and pans and, later, weapons of destruction around and exchanged these with the many First Nations peoples he ran into in his travels. He was a Frenchman who, whenever it suited him, switched his allegiance back and forth from the French to the English. Many called him a traitor. He was always running from someone. His cortisol levels must have been pretty high!

Bush Runner contains 20 pages of footnotes and a five page bibliography. Author Mark Bourrie holds a Masters in journalism and a doctorate in Canadian history, so it’s no surprise that this adventure so dense with historical data – not just about Canadian history but also conflict on the European continent and England. This was an era of extreme agitation and when I checked Wikipedia for the number of wars ensuing between 1648 and 1700 I wasn’t surprised to learn that they list 45.

Radisson, an abandoned youth, arrived in Trois-Rivières as a cagey adolescent just as the Indigenous peoples of North America were dying of epidemics brought to them by pigs, chickens and Europeans. Working from Radisson’s own diaries, Bourrie readily admits that it is hard to separate the wheat from the chaff. Some things line up with other historical references but many don’t.

Radisson later joined forces with his brother-in-law Médard des Groseilliers. They might now be called the first start-ups of the fur trade business. The two understood the yearning for furs in Europe and how to beg, borrow and steal them in the New World. They travelled back and forth across the ocean numerous times to secure funding, just like any start-up would have to do, and played the Kings of France and England off each other and often, but not always, popped up safely between them. Along the way they endured cold, starvation, imprisonment, torture, poverty, fatigue and would easily have been the winners of any Survival show one might imagine.

I appreciated Bush Runner for the forest, but sometimes got lost amongst trees. There is a plenitude of war, travels, and immense cast of characters to keep up with. But I gained a great appreciation for the daily tribulations and cultural sophistication of our local First Nations inhabitants. One of the major reasons that Radisson was able to spearhead the fur trade was because he lived with and studied the many First Nations that he encountered. He learned many languages and therefore was able to trade in their trust. Of course, this trust was often misplaced because he was a bit of a scoundrel!

Johnny Depp, for better or worse, would be well cast in the movie version of this spectacular never-ending adventure of the life and times of Pierre-Esprit Radisson. I’m not sure about you, but Radisson is one of the only explorers I remember from my grade school Canadian history. If you’re one of the many people who think that Canadian history is boring, this book may change your mind.