Review: Somewhere Only We Know 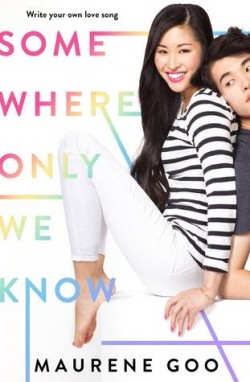 Somewhere Only We Know

Somewhere Only We Know follows Lucky, the greatest K-pop star in the world. After performing her last concert in Hong Kong, Lucky realizes that her passion/job no longer makes her happy. It doesn't give her that same rush of excitement, and instead she has a sort of numb feeling to it all. Flouting her strict low-carb diet, Lucky decides to leave the safety of her hotel room in search of food, more specifically a hamburger. Instead she stumbles into a fellow Korean American named Jack.

Jack is a photographer who works for a tabloid company, a secret he keeps from his parents. At first Jack doesn’t recognize Lucky and genuinely tries to help her because he thinks she’s under the influence. But later on he realizes who she is and spends  more time with her, photographing her in the process and thinking this will help to boost his career. However, the more time they spend together touring around Hong Kong, the more that Jack starts to fall in love with Lucky, and the feeling becomes mutual. The truth looms larger the more he hides his job from her, and its revelation soon becomes inevitable.

I liked how Maurene Goo used a lot of realism when she wrote this book, which really added to the story. You don’t necessarily have to be a K-pop fan to pick out the realistic aspects of the book, like the plastic surgery, personal alienation, racial discrimination, and more. Lucky also rarely saw or spent time with her family who lived in LA, so she was homesick most of time. It’s understandable considering her hectic schedule that she barely has time to eat and sleep properly, let alone see her family. I was very happy when things took a good turn for Jack. He realized his wrong actions and decided to confess to his family.