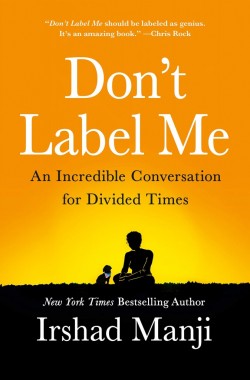 In 2005 Irshad Manji published The Trouble With Islam Today. At the time she was the poster child for a very complicated person – a devout Muslim and a lesbian. Her fierce indomitable intelligence was on display on talk shows everywhere. But this took a toll, and she decided that she needed a break.

She’s back now with Don’t Label Me, one of the most important books written this year – a year that's seen increasing political polarization.

At the height of her popularity, Manji began to have panic attacks in public. She felt that she had become just another brand. The pressure to be “right” yielded to the freedom of being real. As she says, she “disintegrated from a firebrand to a zombie” and lost herself.

Although it might sound very odd, Manji mediates her newfound understanding of how to engage in the world through a friendship with Jim, a Republican, and Lily, a rescue dog that she adopted. Having never loved Republicans or dogs, she was astounded by the teachings that arose from her new attachments .

In conversation with her dog, (yes, her dog) they travel the terrain of the brittleness of political correctness, which often uses shame as a tactic. Through examples of Twitter and Facebook humiliations, she shows how the divide between us widens and shuts down dialogue. It ignites the “us against them” that lurks in our reptilian brain, preventing us from taking disagreement as an invitation to engagement. It’s also full of positive examples where tolerance and open hearted rapport actually forge new relationships.

Manji has not given up the values of her youth but she does have some new rules of engagement which include things like: self-evaluate, interrogate your biases, ask your adversary if there are things that you don’t understand about their perspective, listen to understand, not win, don’t berate, relate, be open to changing your mind. If you are interested in any of these things, don’t miss Irshad on June 6 at 7 p.m. in the cinema. She’s a dynamic speaker! Tickets are for sale in the bookstore or at the door.