Normal People won last year's Man Booker and also was the bestselling book in Britain. It's all well deserved as she understands the zeitgeist of the young, no matter what age they grew up in! 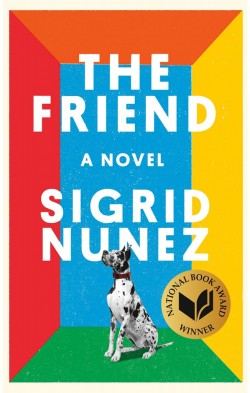 The Friend: A Novel

Sigrid Nunez’s The Friend won the National Book Award last year. This was a curious win, as the book eviscerates the whole literary world, including writers, publishes, and awards juries.

Nunez has recently admitted that she lifted many of the narrative details in the book from her own life. Briefly, a very close friend, who is a professor and writer, has recently died by suicide. The “narrator” attends his memorial service where the more people talked about him, “the more he slipped away.”  A week later his last wife asks her to come for lunch. Turns out that the “writer” had adopted a Great Dane – a stray who wouldn’t go away. The third wife can’t take care of him and would like the “narrator” to take him in. She accepts. Her life changes. And that’s it – a plot that doesn’t seem that interesting.

And yet there are so many things that amazed me about this book.

Firstly, I consumed it in 24 hours.  What a pleasure!

Next, the dead white male hero of the book was a sexually active professor who had three wives and many, many affairs with younger women younger (read: students), is endearing. As “the narrator” says, “He hasn’t slept a night alone for 40 years.” Nunez manages to make him human with his foibles and loveable qualities beating in the same heart. In this era of #metoo, she seems to have evaded social media counter-attacks.

And last, but not least, The Friend is the second book I have read this month that features a dog as both main character and paragon of decency.

The novel is strewn with quotes from writers about writing, of course, but also love, death, mourning, relationships, even dogs. Nunez has obviously kept company with Kurt Vonnegut, Flannery O’Connor, Doris Lessing, Simone Weil, Rilke, Philip Roth, Milan Kundera, Karl Ove Knausgård, and many others. These become The Chorus through The Friend. I wondered how Nunez became such a literary obsessed person, but on investigation I found that she assisted Robert Silver, the long-time editor of The New York Review of Books. Lucky her. Not only was she in the thick of every important book published, but she was also in the trenches where slings and arrows between reviewers and writers were constantly shot and punches conveniently landed.

The Friend’s narrator is often cynical and critical, especially when she exposes the straightjacket that many who work in universities and the publishing industry now find themselves in. Everyone is being careful, careful; very careful. This is just one of the many ways this novel mirrors our current reality. But her chorus of writers often saves both her and us from despair. Chorister Rilke gets an especially long solo of several pages, in which he talks about love as “two solitudes that protect and border and greet each other.” It’s important to know that Rilke loved dogs and that he is one of the narrator’s favourite writers.