Review: The House of a Thousand Eyes 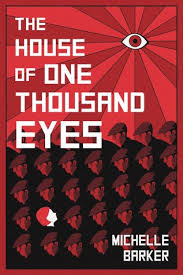 The House of One Thousand Eyes

Lena Altmann lives in East Germany with her Auntie, working at the Stasi headquarters as a cleaner. Her job does not make Lena any friends as everyone thinks she is spying for the Stasi - everyone, that is, except her uncle Erich. Uncle Erich is the best part of Lena’s week, and she goes to his house every Sunday where they talk all day.

One day, Lena goes to her uncle's house only to find no sign of him. Everyone, including the neighbours and Lena's Auntie, are acting as though he never even existed. Lena search for her uncle is to no avail, until her hunt leads her to a Western reporter. The reporter claims that Erich's disappearance relates to secret information about East Germany.

To find her uncle, Lena must discover the truth behind the reporter's story before it’s too late - but who can she really trust in a den full of snakes? I recommend this book to anyone over the age of 13 who likes a good mystery.