REVIEW: FROM GUTENBERG TO GOOGLE 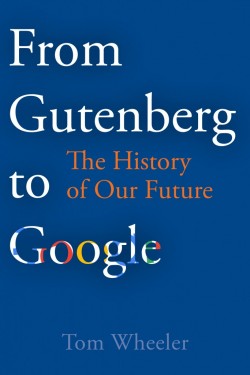 From Gutenberg to Google: The History of Our Future

I’m both afraid of and confused by the future. Thinking about the dystopic landscape of our impending shared life on this planet makes me anxious. I thought From Gutenberg to Google: The History of the Future might shed some light on how to contain the digital fallout of lack of privacy, fake news, loss of control over information, and offer some thoughts about legislation to help control the pervasive monopolies of the Big 4—Facebook, Google, Amazon and Apple!

Unfortunately, author Tom Wheeler, the 31st chairman of The Federal Communications Commission, had little insight into this. He seemed pretty stymied and had no pragmatic ideas other than the general awareness that this pervasive issue deserves our attention. I am sure that he would agree with novelist Don Winslow who writes in his new novel, The Border, “Corralling social media is like grabbing mercury – it slips out of your hands and breaks into a thousand more pieces.”

I may not have gotten the kind of elucidation I was searching for from From Gutenberg to Google, but there were certainly rewarding unintended consequences.

I was astonished by the way Wheeler brilliantly outlines the progression of technology and its sociological, personal and economic consequences. I’m not a left brain thinker but I followed most of this amazing trek. He starts with Gutenberg, and, travelling through the history of the telegraph, the railway, the telephone, ends with our digital age. He uses Rudyard Kipling’s dictum, “If history were taught in the form of stories, it would never be forgotten.” Gutenberg, who took us out of the hands of the princes and the church and opened the door to the enlightenment, went bankrupt when he printed 175 copies of the 1275 page Gutenberg Bible. Wheeler knows the history of these men (of course men) intimately and you can tell that he thrives in their struggle and loves to tell their stories.

He describes our lineage so far. The printing press expanded information. The railroad compressed distance. The telegraph compressed time. Digital technology includes all of the above but with further democratization. He insists the technology is “accretive,” meaning growth or increase by gradual addition. But resistance to changing technology is also accretive. There were anti-railway posters made and distributed in 1893 warning mothers about dreadful casualties of their children dying on the rail lines. In Montreal, when telephone networks were set, people insisted that disease was carried through phone lines. Luddites have always been active. Perhaps I count among them, warning about the paltry significance of privacy and relevance of truth of information. I hope not.

Since 1858, the telegraph era, there has been a million fold increase in the speed of data. Pictures, tweets, Facebook posts, banking data, shopping data – it’s all out there. We need some help for sure and the first thing we need to understand is how to get rid of the Privacy Paradox, which is the difference between expressed concern and actual behaviour. Mark Zuckerberg says privacy is no longer a social norm. We need to work to prove him wrong and grabbing for spilled mercury certainly will not protect our privacy.