Dublin, 1918: three days in a maternity ward at the height of the Great Flu. A small world of work, risk, death and unlooked-for love. Eerily timely! 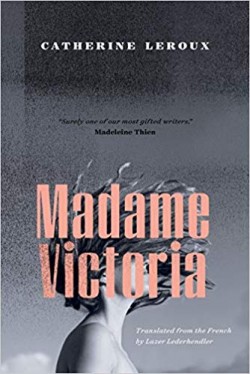 A skull is found in the woods near the Royal Victoria hospital in Montreal. Despite facial reconstruction, DNA, extensive research of the hospital records, no identity can be found to match the skull.

Catherine Leroux presents a series of possible lifelines that could have led to this unknown woman dying so close to a hospital. The stories often show women put in restricting/limiting circumstances and then fading from sight. Supporting characters often reappear in different stories though never quite the same. Many/most of the Victorias become invisible and hence their absence is not noticed. Alternatively, they may be invisible to the masses only because their
presence is uncomfortable.

One of the most chilling questions posed was “if she dies with no one to bury her, to pray for her soul to cross the final rivers, if she disappears without anyone even noticing, will she have lived?”

The novel forced me to ask myself, why do I see some people but only glance at others, what makes a person invisible from my lens?