Inspired by a handful of old postcards sent by Uncle Leroy nearly a hundred years earlier, Bird and Mimi attempt to trace Mimi's long-lost uncle and the family medicine bundle he took with him to Europe.

Sacco's measured artwork lets the Dene people speak for themselves, working in tandem with the historical and sociopolitical context that he deftly interweaves. 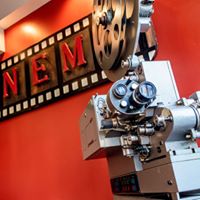 These Oscar nominated films are

playing @ the Bookshelf Cinema from

*Cinemas Box Office opens half an hour before the show & is cash only.

**Advance tickets can be bought in the Bookshelf bookstore using cash or plastic.

Our cinema is fully licensed too- yup, you can enjoy a glass of wine, or beer while you watch the film. There's also, popcorn, ice cream, fresh baked cookies, coffee, tea and pop available for purchase as well!

WE ARE ALSO PLAYING THESE INCREDIBLE PICTURES:

THE WOMAN WHO LOVES GIRAFFES

TREAT YOURSELF TO AN OSCAR NOMINATED FILM & DINNER!

Buy your movie ticket with your meal and save your seat in the cinema - offer available Tuesdays to Saturdays, beginning at 5PM