REVIEW: THE SECRET WISDOM OF NATURE 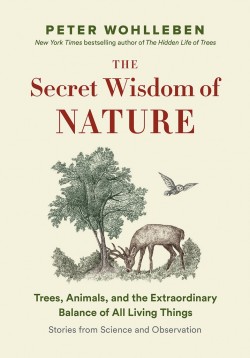 The Secret Wisdom of Nature: Trees, Animals, and the Extraordinary Balance of All Living Things -- Stories from Science and Observation

Back in the early 90’s, I read a book by renowned physicist and astronomer Freeman Dyson called Infinite in All Directions. It was a lyrical evocation of his belief in the infinite quality of the universe and the infinite responsibility of man. Now, a quarter century later, Dyson is espousing geo-technology as the way to combat climate change. I was shocked. Geo-technology contains some pretty wild ideas, like solar radiation management—that’s when we put stratospheric sulphate molecules into the atmosphere which would reflect sunlight—but if such a discerning scientist as Dyson was thinking this way, perhaps we should begin trusting technological fixes to bring our world back into balance.

After reading The Secret Wisdom of Nature, I have gained much more insight into how complex and interconnected everything is and how even the slightest changes introduced by humans often have irrevocable outcomes. Man wielding a technology truncheon, even with the best of intentions and supported by the likes of Dyson, does not seem the way to dig us out of our problem.

This is the fourth book translated into English by Peter Wohlleben, author of the perennial (love the botanical reference) best seller Hidden Life of Trees, in which among many other things he describes the miraculous way trees communicate through fungal connections. It’s been read by millions, so let’s hope that he has lit up human curiosity about nature in general.

Wohlleben a scientist who knows how to write. His work is a mix of both stories and data. Here is one of the more simple ones: On the banks of rivers in Yellowstone Park, ranchers insisted on the culling of wolves. Killing the wolves allowed the elk population to explode. Elk, of course, love to eat the leaves of small shrubs and trees along riverbanks, which kills the trees. Those trees anchor the soil in place, and so, because of wolf culling, the soil has now eroded into the river. Riverbanks have become wastelands. To return to balance, they then introduced the wolf back into the forests of Yellowstone, but this has not been without it's own particular problems.

In The Secret Wisdom of Nature, Wohlleben so passionately and knowledgably illustrates that we live in a world of so many attachments, most of which we are totally unaware.

The planet is definitely suffering. The facts are pretty clear. The morning I started this review, there was an article in the New York Times that reported an 86 % drop in Monarch butterflies this year. Monarchs winter in California, where its food source milk week is also disappearing because of pesticide use and urban development. Today it is 48 degrees centigrade in Australia. One thing I know after finishing this important book is that Wohlleben would definitely applaud any efforts to plant milkweed and of course more trees. More trees, less solar radiation management.