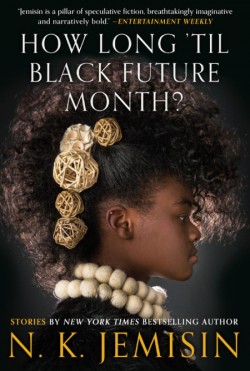 How Long 'til Black Future Month?: Stories
Once ghettoized, science fiction and fantasy have lately taken over popular culture. For all their ubiquity, though, I'd say the worth--and power--of these genres remains undervalued. They're still viewed as essentially frivolous or escapist. Yet these speculations occupy a place in our lives that fiction concerned with the present has no purchase on. Sci-fi and fantasy have always had a great influence on our imaginations. After a generation or two, imagination solidifies into expectation and, over time, we adopt the futures imagined by writers we maybe don't know the names of.
With the importance of speculative fiction in mind, it does no good to tiptoe around the reality: our present has been created mostly by white imaginations. And whether by oversight or intent, those imaginations have often only dreamed of futures for themselves.
"What happened to all those [not-white] people in [the Jetson's]?" wonders three-time Hugo award-winning author N.K. Jemisin in her 2013 essay on futurism, Janelle Monáe, and how hard it's been for her to be a lover genres that ultimately exclude her. "Are they down beneath the clouds, where the Jetson's never go?"
Jemisin's first collection of short stories, How Long 'Til Black Future Month?, takes its title from that essay, and goes a long way towards introducing inclusivity to the usually exclusive future she laments in it. "How terrifying it's been to realize no one thinks my people have a future," she writes in the collection's introduction. "And how gratifying to finally accept myself and begin spinning the futures I want to see."
The worlds in these career-spanning stories have forked. There are rifts created by technology, philosophy, or magic, chasms opened up between people who choose new ways of living and thinking, and those who stick to the old ones. Which is to say that Jemisin's futures are not so different from our present. One person's utopia inevitably becomes another's dystopia, and a specificity of vision or path inevitably leads to the exclusion of some.
Yet Jemisin's worlds are not so simple as Good Future or Bad Future. They are often about the conflict and conversations of the positive and negative of whatever path, and how no future comes without sacrifice. The greatest mistake to make when imagining the world that awaits us is that the future will be a fixed place. Jemisin's worlds, no matter how fantastic, feel real because they are worlds in flux.
How we imagine our future says a lot about how we live our present. The future is where we stash all our guilt. In the wake of the atomic bomb, the white imagination--the same one that imagined and created that bomb--has been dreaming an increasingly grim outcome. Annihilation or disintegration now feel as certain as flying cars once did. As pilots of our own world, we have the first-time-driver problem or turning the wheel wherever we turn our gaze. Looking towards ditches as we are, it's hard not to assume that that's the direction we'll take.
There's been a lot of necessary talk about representation in our present media, but we also need to put in some serious consideration of representation in the future. In her introduction, Jemisin remembers the powerful moment of her first pro sale: "Cloud Dragon Skies" is "about a nappy-haired black woman trying to save humanity from its own folly," a character usually excluded from the genre. Her writing is her way to bring the "not-white" people from beneath the clouds.
But it's not enough to include not-white people in the future. The fact is that white imaginations are destroying the world with greater frequency, both fiction and in real time. The thing to do is cede imaginative influence. And there's no time like the present to let somebody else to take a crack at the future.
Go To Page Turners & Pot Boilers