Guileless and refreshingly honest, Terese Mailhot's debut memoir chronicles her struggle to balance the beauty of her Native heritage with the often desperate and chaotic reality of life on the reservation.

Mamaskatch: A Cree Coming of Age

Dead Reckoning: How I Came to Meet the Man Who Murdered My Father

Homes is the remarkable true story of how a young boy emerged from a war zone — and found safety in Canada —A Canada Reads contender!

The Wife's Tale: A Personal History 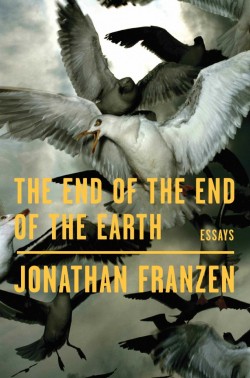 In the first few pages of his third collection of essays, The End of the End of the Earth, Jonathan Franzen describes himself as a “pessimistic depressive.” This, he says, carries the benefit of being able to “laugh in dark times.” I guess this characteristic got him into trouble in 2001, when his novel The Corrections was chosen as Oprah’s Book Club Pick. Franzen was characteristically underwhelmed and had described several of her previous picks as schmaltzy and one-dimensional. At the time, I thought that this was funny, but Oprah certainly didn’t. She disinvited him to appear on her show and a soft guerrilla war waged between them for a decade. There seems to have been some peace accord in 2010 when he said he was said that he was honoured to be on her show for the latest Oprah pick, Freedom.

Along with many, I had stereotyped Jonathan Franzen as a grouchy, white, literary novelist, but in his new book of essays he seems to be channelling the 16th century philosopher Michel de Montaigne, someone who was known to have great compassion and sought to be of service to others. The word essay comes from the French infinitive essayer, which means to attempt. De Montaigne had said “I speak the truth, not so much as I would, but as much as I dare: and I dare a little more as I grow older.” Similarly, this 21st century book of “attempts” reveals some truthful Franzen invective…. the earth and our politics are in trouble. But in the process, an interesting by-product emerges—a more vulnerable, romantic Franzen.

Like de Montaigne, Franzen uses the essay to explore and explain himself. His revelation about his smoking addiction and the shame around it is worth the price of the book alone. It made me both laugh and cry. A few pages later you will find him bemoaning our digital drowning, calling this pervasive technology “capitalism in overdrive.”Social media is written off as a silo that he tries to stay away from, saying that empathy begins with face-to-face interviews. This sounds uncannily familiar to something de Montagne wrote over five centuries ago: “In my opinion, the most natural play of the mind is in conversation.”

Of course most of the essays have to do with the earth and especially the plight of birds. Although he appears to suffer cognitive dissonance burning up hydro-carbons to travel the world chasing species after species to add to his life list, Franzen freely admits that this definite obsession has become an organizing principle in his life. For him too, “Hope is the thing with feathers.” After all he says, “Emperor penguins are our children too.” This side of the man who describes himself as a pessimistic depressive is filled with love.