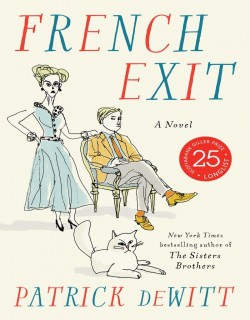 The cover of this book gives some excellent clues as to what’s inside.

Take a careful look at the sketched characters, even the cat. They look you right in the eye, unencumbered by whatever judgment you may have of them. The overall design is spare, elegant and whimsical, exactly mirroring the writing inside. And in my mental lexicon, the overall feel is of another era, one in which a dry martini with an olive is as common as bottled water now.

I saw this book as a film with Patricia Clarkson as the narcissistic mother, Frances, who didn’t care a wit (no pun intended) about her son Malcolm as he was growing up, but trapped him in an infantile cocoon, one in which he could not escape. My mind’s eye cast author Patrick DeWitt as a perfect Malcolm— dependent, morally confused, but also splendidly insightful and funny. If I met these two in person, I would probably steer clear, but on the page they tickle my absurd bone and made me laugh many times.

DeWitt is best known for a western, The Sisters Brothers, which is about to be released as a film. Whatever made him think that he could write about the Upper East Side and concoct a plot in which a pampered woman hates her magnificently wealthy husband, and just leaves him after he has died of a heart attack so she could go out skiing? For the next few years money is no object for her and her aesthete of a son. They spend it. Alcohol is no problem. They just drink it—continually. They live a life of unabashed leisure, and it’s infectious. I’ve never felt so relaxed while reading a book.

But all good things must come to an end and they do, hence the title French Exit. Yes, that’s the plot… And it works!

Little gems of understanding are sprinkled liberally throughout. Here’s one: “We are pinned to a frozen marble boulder skating through black space at an obscure rate of speed. They say we will soon collide with the sun, or moon, or some passing asteroid. But when. Perhaps today? Quite likely tomorrow. Be sure that the end is coming and you can take that to bed with you.”

It’s a tough thing to be able to combine farce with philosophy, but DeWitt does it. I’m thinking that he might win the Scotiabank Giller Prize. It certainly wouldn’t be the politically correct choice but it might be the aesthetic one.