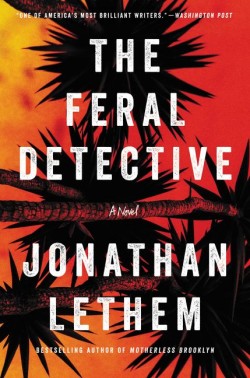 The Feral Detective: A Novel

Infiltrating a bastardized 70s-era Utopian sect living in the Mojave desert, where she has come to find the missing daughter of a friend, New Yorker Phoebe Siegler casts her thoughts beyond this sere, alien world that's becoming to seem more real, more essential than the one she's left behind not even a week ago, and remembers what day it is. It's as though she's woken from a dream.

"I did the math and realized that we were some number of hours into the new world. Barack Obama was no longer president."

It's January 2017, reality star Donald Trump is now behind the wheel of the free world, and Phoebe has lost herself in a war between desert tribes of hippies and bikers who sought to flee civilization but now find themselves acting out the basest aspects of it. In both worlds at once, Phoebe charges into the middle of one such muddy, bloody, naked and feral conflict, screaming, "DO YOU EVEN KNOW WHAT'S GOING ON, YOU STUPID FUCKING ASSHOLES? DID YOU FUCKERS EVEN VOTE?"

Returning to the detective story after his debut, Gun, With Occasional Music, and his breakthrough, Motherless Brooklyn, Jonathan Lethem uses the well-worn genre tropes as a means of accessing what feels like a blisteringly contemporary world. The Feral Detective is a mystery set in new world that seems increasingly devoid of mystery, where perfidy is executed is in full view and there's no doubt about someone's allegiances.

Bringing to mind all the left-leaning threats to flee if the election didn't turn their way, Lethem is here concerned with the desire to escape, contrasting the 70s-era push to renew civilization with the current feelings of wanting to exit the nightmare that democracy has become. To what extent should someone be allowed to disappear if they want to? Should they be brought back to fight for a reality they feel is failing them? The reason for Phoebe's friend's daughter going AWOL are vague, but who needs a clear reason to want to escape these days?

"In case it isn't obvious," Phoebe pauses to tell us early on, "there's a detective in this story. But I'm not it. I had myself halfway cast in the role when I got on the plane, but no. Sorry. Then again, the story does involve a missing person, and it could well be me. Or you or practically anybody."

In The Feral Detective, Lethem offers both more action and more unadorned contemporary commentary than he ever has. Of course he would have to be quick and clear, as the news moves at such a fast, sloppy klick that even the January 2017 setting feels like the distant past.