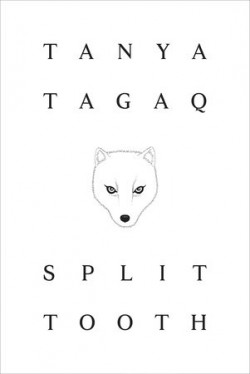 THE FINAL REPORT OF THE TRUTH
Split Tooth
Adolescence, even at its most unpoetic and undramatic, is an often profound, often terrifying, often banal process of discovering the many secret, contradictory machinations of the world. Life, in all its repugnance and splendor, for better and for worse, comes slowly into focus. "There are other realities that exist besides our own," explains the narrator of Split Tooth, "it is foolish to think otherwise."
We meet Tanya Tagaq's unnamed narrator in a closet. It's 1975, Nunavut, she's 10 years old, and she's hiding from the drunks returning home from the bar. "We giggle nervously as the yelling begins. Become silent when the thumping starts." This attempt to stay hidden and protected from the unfortunate goings on of the adult world is in vain. Her uncle opens the door and stares in, bleeding profusely from the head, and tells them not to be scared. What follows, a mix of biography and fiction, is an adolescence equal parts violence, adventure, and tedium.
Coming up in a place traumatized by historically recent interventions and molestations, Tagaq's avatar begins to perceive the increasingly clear palimpsest of an older, more natural world beneath her own, beyond her corporeality -- a reality both within and without her. "Where did the knowledge come from?" she wonders when first she begins to see and feel inklings. "No one has taught us how to do this, but the ritual is old and living in our bones."
"Spirit is already divine," the narrator says, older now -- it's 1982 and she's 17 and has been "sent back home from residential school after a suicide attempt. -- "We must feed Divinity with devout intent and Spirit grows stronger, cleansing and returning to reality upon Death. What happens before birth and resumes after death--this is more real than the brief spark of life. Our lives just carry the physical burden of carrying energy forward. We put on suits of meat as training, as challenge. We all know this is temporary."
Split Tooth is both fractured and direct, horrible and beautiful, so surreal in its reality, so real in its surreality. If you're a reader, like me, who likes to underline striking passages, you'll find sections of this book bloated with your ink. Like its narrator, Tagaq's writing is both weighted down in the troubled, material world while also being free to explore the ageless, phantasmagorical world that exists behind it. There are realities that exist beyond our own, and they are all gathered and explored here.
Go To Literary