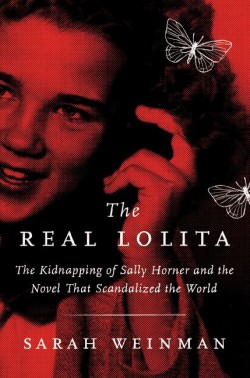 The Real Lolita: The Kidnapping of Sally Horner and the Novel that Scandalized the World
One doesn't need to have read Vladimir Nabokov's Lolita or seen the adaptations to have some notion of the story: an older, erudite man lusting after--maybe even tempted by, depending on your reading--a young "nymphet" in heart-shaped glasses, maybe working languidly on a lolly. The book is, by all measures, a success. It's reputation proceeds it. But who gets to claim this success? Nabokov or his book's famously unreliable narrator, Humbert Humbert?
Véra Nabokov had this exact concern. In The Real Lolita, Sarah Weinman finds her bothered by how "public reception, and critical assessments, seemed to forget that there was a little girl at the centre of the novel, and that she deserved more attention and care." In her husband's diary, which she had taken over, Véra writes, "I wish someone would notice the tender description of the child's helplessness, her pathetic dependence upon the monstrous HH, and her heartrending courage all along... They all miss the fact that the 'horrid little brat' Lolita is essentially very good indeed..."
The challenge of Lolita (after one gets comfortable reaching for a dictionary every page or so) is maintaining immunity to Humbert's ensorcelling version of things, staying focused on the actual story of a man abducting and abusing a young girl. The novel doesn't make this easy and "sixty years on, many readers still don't see through Humbert Humbert's vile perversions, and still blame Delores Haze for her behavior, as if she had the will to resist, and chose not to."
Weinman, a crime writer to watch if you're not already, is just the reader Véra Nabokov hoped for her husband's book, bringing insight, thoroughness, and compassion to her reading. Though Weinman does one better and not only sees through Humbert, but endeavours to see--certainly to the imagined chagrin of Véra, who may have gotten a more sensitive reading than she bargained for--through the elusive and evasive author himself.
In June 1948, eleven-year-old Florence "Sally" Horner disappeared from Camden, New Jersey in the company of a man calling himself Frank La Salle. Sally's disappearance and reappearance more than a year later made national headlines, as did her death two years after. Six decades past all the press, the plight of this young girl has faded into obscurity while the ubiquity of Nabokov's novel shows no sign of dissipation. While Nabokov would never cop to Sally's real-life impact on his long laboured-at novel, Weinman's research uncovers similarities that suggest undeniable influence.
But Weinman's task is hardly to take the venerated writer to task for not citing his influences. It's not enough to reveal Sally hiding in Lolita, but to free her and the very idea of the "little deadly demons" from both the book as it is and the book as it's culturally misremembered. "Humbert Humbert was describing a compulsion," Weinman writes. "Vladimir Nabokov set out to create an archetype. But the real little girls who fit this idea of the mythical nymphet end up getting lost in the need for artistic license. The abuse that Sally Horner, and other girls like her, endured should not be subsumed by dazzling prose, no matter how brilliant."
Back and forth, Weinman juxtaposes the life and abduction of Sally Horner with the life and obsession of Nabokov. The cumulative result is the enormity of a stolen young life reduced to a headline, somewhat stolen again as fodder for a struggling project, which then becomes perverted into a cultural idea that runs repugnantly contrary to and successfully serves to obfuscate its origin. Weinman never loses sight of her purpose, though, and always keeps Sally Horner visible. Even when the weaving of her true crime story stands the risk of becoming thrilling in a way that might sensationalize its subject, Weinman comes back to the reality, back to fact of Sally.
"The appreciation of art," Weinman warns her reader at the outset, "can make a sucker out of those who forget the darkness of real life."
Go To Lives