REVIEW: BOYS: WHAT IT MEANS TO BECOME A MAN 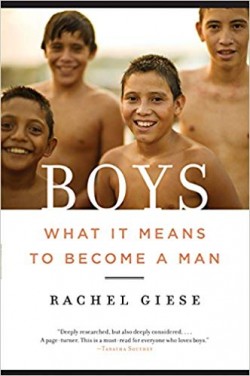 Boys: What It Means to Become a Man in the 21st Century

When I heard that Rachel Geise was coming to The Bookshelf, I grabbed Boys: What it Means to Become a Man and sank into her direct and researched experiences in “boyworld.” For the past year, my house has become something of an embassy for boyworld, as I’ve been living with my two grandsons and their parents while their house undergoes a large reno.

The kids are 14 and 12—creative, loud, and burgeoning ages. Our house has also become a hangout for all of their friends. I often walk in and hear five or six boys yelling, laughing hysterically, and chastising each other while they play Fortnite. It’s a shooting game, so of course it bothers me. I used to glower at them for spending way too much time online, but my daughter has told me that my disapproval makes them feel guilty and ashamed. So now I settle for reminding them about books and the outdoors every now and then. These are basketballers so they do spend some time outside, but still I worry.

Giese describes the “manbox” that most boys and men are trapped in as a socialized realm where to feel or show any kind of emotion is a setup for fear and anxiety. The more deeply embedded one is in the manbox, the more likely a boy or eventually a man is likely to binge drink, have unprotected sex, and be prone to violence, depression and suicide. Giese even has some sympathy for bullies. The data on boys having trouble in school is largely a result of race and class, a predisposition that was exacerbated during the Harris years when suspensions from school went up by 50,000.

Geise also casts an eye on sex education, particularly in the U.S.—which is rife with abstinence programs—where the rates of teenage pregnancy, STDs and sex crimes have been on the rise and information on LGBTQ concerns are basically non-existent. In contrast, Giese illustrates the Dutch example. They are “the world leader of comprehensive sexual and relationship education which builds abilities like communication, negotiation and self-awareness, while teaching matter-of-factly about reproduction, sexual orientation and sexual health.” They have to lowest rates of teen pregnancy, HIV and STDs. Also, 90% of boys 12 to 14 say they have been in love. That’s pretty great!

Giese and her wife adopted their son when he was very young. Raising an indigenous boy opened a perspective that reached beyond their own white culture and serving to make Boys even more thought-provoking. Giese uses detailed research to show that black and indigenous boys are on an even more rocky terrain.

Rachel Giese has so much to offer to those who either inhabit or observe boyworld. She will be at The Bookshelf’s Ebar on September 24 at 7 p.m, in conversation with Daemon Fairless, author of Mad Blood Stirring: The Inner Lives of Violent Men. We encourage all teachers, parents and politicians to attend. It should prove to be an instructive and emotional evening!