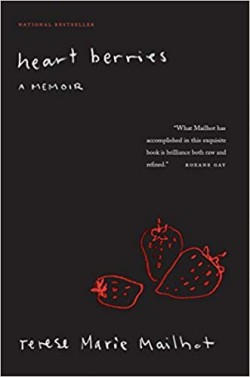 THE FINAL REPORT OF THE TRUTH
Heart Berries: A Memoir

“The strawberry teaches forgiveness and peace. The strawberry is shaped like a heart and is known to our people as heart berries. “ - Elder Lillian Pitawanakwat

Terese Marie Mailhot lived on the Seabird Island Reservation in British Columbia, bearing a tumultuous life from the very beginning. Her alcoholic father sexually abused her from a very young age and her very political mother spent her love on helping prisoners in jail. Her loving grandmother, a victim of the brutal residential school system, was her lifeline.

As she recounts in Heart Berries, her parents were only the beginning of her travails. Mailhot was removed from them and forced into the world of Children’s Aid. A teenage pregnancy followed, and then a marriage, a birth, a separation, the removal of her child, another baby, and an affair with her writing teacher which also brought forth another child who was in utero when Mailhot attempted suicide. Then came a diagnosis of bipolar disorder, the general fracturing of her personhood and, finally, a slow rebuilding.

Mailhot writes in fragments as she tumbles through different times and experiences. There were moments when I wondered to whom she was addressing her harangues and discourses, but, ultimately, it didn’t really matter. The tender flesh of her psyche is what captures you and makes you realize that this is a person with guts who has a lot of kick and verve in her. Words are power and Mailhot knows that.

For me, a scintillating part of her fragmented account is her ability to capture a thought that I have held in only the haziest of forms. She hits it out of the park: “I think self-esteem is a white invention to further separate one person from another. It asks people to assess their values and implies people have worth. It seems like identity capitalism.” This idea is further enhanced by her stories of an opposite way of being: community rituals that Indigenous people know intuitively are the best way to heal, together and over time.

This slim black book has three small, beautifully etched strawberries on the bottom of its cover. It seems as if Terese Marie Mailhot must have had some input into the design as it speaks truthfully to the fact that, while much of her life has been smothered by the dark forces of racism and sexism, there is still a small, vibrant heart beating inside her.

There’s a lot to learn from and be amazed by here and I imagine that is one of the reasons that people across North America are reading it. Indigenous and non-Indigenous readers will say Miigwetch.