REVIEW: THE DEATH OF TRUTH 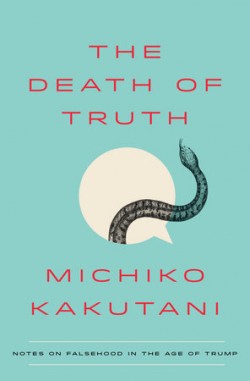 The Death of Truth: Notes on Falsehood in the Age of Trump
The Declaration of Independence pops a moral umbrella under which all Americans are supposed to be able to gather. It's an assertion of the rights given to "all Men" by "the Laws of Nature and Nature's God" to fight for what they think is right. Essentially, the document amounts to (for those of us who remember Science Fair) the hypothesis for what would become known as the American Experiment.
"We hold these truths to be self-evident," begins what might be the most important statement in American letters (some argue in all of the English language), "that all men are created equal, that they are endowed by their Creator with certain unalienable Rights, that among these are Life, Liberty and the pursuit of Happiness."
The Declaration is the product of a profound sense of shared reality. It expresses a beautiful idea, that the rights and equality of an individual would be as obvious and indisputable as a fart in an elevator, but if you were, say, a woman or a person of colour, then your reality wasn't the same as the white men who set down a beautiful justification for their own rebellion. It's been proven time and time again that there's limited room beneath that moral umbrella, that these foundational truths weren't the same for everybody.
This problematic idea of self-evident truth may just be the Chekhov's Gun of the United States of America. That would make the presidency of Donald Trump America's third act, where the firing pins are coming down on a whole nation of personal truths and, by extension, personal facts.
In The Death of Truth, recently-retired New York Times critic Michiko Kakutani digs up the roots of falsehood in the Trump era. Over the course of this slim book, she unpacks how truth and reason became an endangered species, and what their impending demise portends for our public discourse and the future of politics and governance. Kakutani sees Trump as "less a comic-book anomaly than an extreme, bizarro-world apotheosis of many of the broader, intertwined attitudes undermining truth today, from the merging of news and politics with entertainment, to the toxic polarization that's overtaken American politics, to the growing populist contempt for expertise." These weren't attitudes imported by Trump--who she describes as "some manic cartoon artist's mashup of Ubu Roi, Triumph the Insult Comic Dog, and a character discarded my Molière"--but rather are ones "emblematic of dynamics that have been churning beneath the surface of daily life for years."
While the problem of shared truth, shared facts, and shared reality has been there from the start, and has certainly been exacerbated by infotainment, social media, and foreign meddling, Kakutani locates the fulcrum of our current crisis in an unlikely place. "Since the 1960s," she writes, "there has been a snowballing loss of faith in institutions and official narratives." Vietnam and Watergate spurned a necessary skepticism of government, but Kakutani finds the challenging of shared reality in academia "under the broad umbrella of postmodernism" as a sort of point of no return. Applied to literature, film, architecture, music, and paintings, postmodernism's denial of an "objective reality existing independently from human perception" is all well and good, but when these "theories were applied to the social sciences and history, however, all sorts of philosophical implications, both intended and unintended, would result and would eventually pinball through our culture."
While such a destabilization was essential for challenging that overarching self-evident truth which favoured "Western, bourgeois, male-dominated thinking," relativistic thinking would, over time, become "hijacked by the populist Right, including creationists and climate change deniers who insist that their views be taught alongside 'science-based' theories." Over the past half century, the idea of unbiased reality--ie. facts--has been so shattered that the rubble gets used by someone like Trump and his government to label any truth that disagrees with what is self-evident to him as "fake."
From there, it's a short walk to the sort of tyranny the Declaration balked. "The ideal subject of totalitarian rule is not the convinced Nazi or the convinced Communist," Kakutani quotes Hannah Arendt from The Origins of Totalitarianism, "but people for whom the distinction between fact and fiction (ie. the reality of experience) and the distinction between true and false (ie. the stands of thought) no longer exist."
At the close of her introduction, Kakutani quotes early Trump casualty, former attorney general Sally Yates: "We can debate policies and issues, and we should. But those debates must be based on common facts rather than raw appeals to emotion and fear through polarizing rhetoric and fabrications. Not only is there such a thing as objective truth, failing to tell the truth matters. We can't control whether our public servants lie to us. But we can control whether we hold them accountable for those lies or whether, in either a state of exhaustion or to protect our own political objectives, we look the other way and normalize and indifference to truth."
Following the declarations of their rights, the 52 signees of the Declaration set down a laundry list of the King of Britain's "repeated injuries and usurpations, all having in direct object the establishment of an absolute Tyranny over these States." These grievances--among which you'll find, presciently, "He has made Judges dependent on his Will alone, for the tenure of their offices, and the amount and payment of their salaries"--and the Declaration itself, amount to "Facts... submitted to a candid world."
Read archaically, "candid" here means "unbiased." Truth and Facts, then, are the cornerstone of America's creation, so it only makes sense that dispute over Truth and Facts are evidently the cornerstone of its dissolution as well.
Go To Non-Fiction