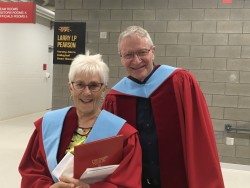 Has anyone ever told you to mind your own business?

It wasn’t very pleasant was it? Usually this remark is a put down, made by someone who believes that they have the power to control how you think, speak & act.

The most shocking time this was said to me was after my first year of university. I was working for the summer in Toronto at what was then called a Reform school for girls. One day I was asked to serve a meal to a “prisoner” in “solitude”. I unlocked the door to find a young Indigenous girl in the middle of scratching her arms with a safety pin. It was a scorching day. There was no air flow in the room. She was clearly in so much pain, both physically & emotionally. I immediately went to the nun in charge, pleading that it was wrong to treat a person like this, in fact it had to be a sin. Her rigid and controlled response was….Mind your own business. This left me shocked, confused & angry.

This is my most extreme example. But both Doug & I, when we were exactly your age…. were having trouble fitting WHO WE WERE into a job that allowed us to feel at home. So we took a few months off to travel in England and immediately fell in love with the bookshops there. They were beacons of culture & sanity.

When we returned to the “real world” we had intense conversations daily about what to do with our lives. With the paradigm of independent bookshops embedded in our consciousness we thought, why not? Why not really and truly MIND OUR OWN BUSINESS by starting a bookstore – one which embodied who we were. And so after intense planning, the very crucial support of our parents, and against the opinions of many who worked in the publishing industry, we opened our first store in 1973.

I would be lying if I said that it has been easy. We have had too many challenges to mention in this short speech….but I can sum it up in 3 words….Capitalism likes big. The chains amalgamated; big box stores boomed and then busted. Technological change and e-commerce have since put incredible strains on small retailers. But we were also lucky back then. It was the golden age of Canadian publishing….Great writers like Margaret Atwood, Michael Ondaatje, and Alice Munro were making it cool to read Canadian and to BE Canadian. And our customers were our collaborators. We were in it together!

A few years later we plunged into the restaurant business – knowing absolutely nothing about it – and became the first bookstore café in Canada – serving food we cared about. And again, almost a decade after that we added a second floor while still operating the bookstore and café downstairs….(This was a very crazy time but fortunately Doug likes to build things). We then dove into the cinema business showing films we hoped people would want to see. Our film programmer Peter Henderson has been with us since then and has been the genius behind the cinema.

Finally we expanded into the building next door and it was there that we were able to really set the stage for so many fundraisers, readings, debates and concerts. We have been able to showcase & sponsor local arts of all kinds. We are thrilled that our adult children, Hannah, Ben & his wife Stephanie have been owners for the last 5 years and are committed to steering this amazing arts emporium into the future.

How a 5 year old girl whose mother took her to the library every week ended up here on this stage is somewhat of a mystery. But that girl knew that books would change her life…every day. She would only have to open one and the scenery of the world would change, the souls of writers and their characters would be revealed and her understanding of life would be enhanced……

You know, there have been many people recently who have prophesized the death of the book. But it is a perfect amalgam of form and content. I do believe that Books will live on!!!

In closing, I would like to say that one day you CAN actually mind your own business, in the best possible way….in a way that lines up with your deepest values. And along the way you MUST also mind your loved ones, mind your friends, mind your passions, and most of all mind our most precious gift, Mother Earth. The world is an amazing place. Be involved, be collaborative, keep your curiosity kindled, be citizens of the world…. and you definitely won’t be sorry. Big hugs and congratulations to each and every one of you who are graduating today!

And now I am very pleased to introduce my energetic co-conspirator – Doug Minett.