REVIEW: IN SEARCH OF THE PERFECT SINGING FLAMINGO 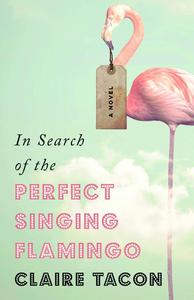 In Search of the Perfect Singing Flamingo
"What if I'm wrong about the rest of the world?"
Eighteen-year-old Darren's first time out of the blast zone of Ontario is as a tag-along with Henry, a repairman who services two Frankie's Funhouses (think Chuck-E-Cheese), and Henry's daughter Starr, born with Williams syndrome. Henry's got a lead on an old, collection-completing Fanny Feathers automaton, Starr's favourite character, from a franchise in Chicago that's switching to digital entertainment. Darren, who dons the Frankie head at one of Henry's locations, is coming with, hoping for another shot with his high school girlfriend who's escaped to film school and screening her student short at the city's sci-fi convention.
As an adolescent, you assume that once you get beyond your own familiar, staid world, everything turns vibrant. Somewhat on the lam, defying his parents for the first time in his life, these are Darren's assumptions. Instead, in the backseat of Henry's car, all Darren sees in the broader world is sameness. Maybe his assumptions and hope that life beyond his childhood would be any different were misinformed. "Maybe the whole planet is now dotted with drive-through Starbucks and twenty-screen Cineplexes," he thinks. "Maybe suburbia is the modern blob, suffocating every landscape it touches, littering the continent with identical homes, brick to the waist, siding on top, lumpy as an outfit bought on special at the Gap Factory store."
Of course, the suburban sprawl and the chain dominance that bums out the young Darren is a design of safety and reliability and survival. Surprise is more and more being edited out of the world he's entering. The sameness of the suburbs are a defence against the unknown and unexpected. No matter where you go, you know what you'll find there. Told from the perspective of Darren, Henry, Starr, and Henry's younger daughter Melanie, Claire Tacon's second novel, In Search of the Perfect Pink Flamingo, is concerned with the risks and rewards of sameness.
Starr is perhaps the clearest expression of the dilemma at the heart of Tacon's novel. As an adult with Williams syndrome, Starr's life is a tapestry of routine. Whether it's rehearsed bus routes or sandwich assembly instructions, Starr's independence relies largely on predictability. The unexpected can be traumatic for Starr and could potentially derail her autonomy. True growth and strength, however, don't occur without some conflict. So what's best for Starr? Protection from or exposure to the unexpected? In one way or another, everyone in In Search of the Perfect Singing Flamingo poses this question or has it posed to them.
In an effort to support and facilitate his daughter's happiness and safety, Henry quarantines and routinizes his own life. In doing so, he shuts up aspects of his wife and youngest daughter's lives, too. Trying to keep things as uncomplicated as possible has a way of complimenting things. Travelling across the border to get the perfect singing flamingo for his daughter should be the thing to make everything right with the world, but instead the road trip turns it on its ear. What's comfortable isn't always what's best.
In Search of the Perfect Singing Flamingo is equal parts compassionate and tough, fun and punishing. What the right thing to do for yourself or for another person is rarely cut and dry, and no matter which decision you make -- the safe one or the unsafe one -- there will be consequences. From the outside, reliable suburbs might appear to protect from conflict, but they usually only serve to conceal it.
Go To Literary