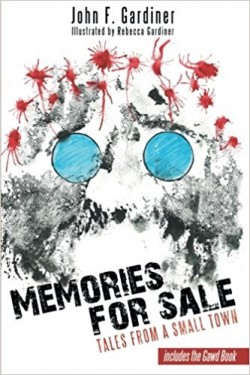 Memories for Sale: Tales from a Small Town

The Memories for Sale Book and Other Stuff Tour is coming to Guelph on Sunday, May 6 at 2:00 p.m. to the Bookshelf. This unique literary tour, which will feature an afternoon of words and music, has been organized by writer John Gardiner in support of his new literary collection, Memories for Sale: Tales From a Small Town.

“After a very successful  launch for Memories for Sale last summer and a series of excellent reviews, I’ve decided to tour the book across Southern Ontario this spring,” Gardiner said. “The same way a musician would go on tour to support a CD, I’m doing with my book.”

Gardiner will be reading selections from Memories for Sale in the ebar and will be joined for the performance by iconic Canadian folksinger/songwriter James Gordon. James has released 35 albums over his career as one of Canada’s leading folk performers and has appeared at festivals and events across the country; he is also a Guelph city councillor and a major advocate for social justice.

The writing in Memories for Sale delves deeply into the human condition as the author uses a diverse mix of  voices to tell the stories of a variety of characters from a troubled teenage girl to an old man waiting for the end of his life. Indeed, the title story, "Memories for Sale", is the story of an old man’s last day in his home – when most of his earthly possessions will be auctioned off…..his memories for sale.

The Memories for Sale Book and Other Stuff Tour will be making a number of stops across Southern Ontario. Shows are planned for Windsor, Ridgetown, Grand Bend, Owen Sound, Durham, London, Toronto, and St. Catherine’s as well as Guelph. Talented local musicians will join the Wallaceburg author at most stops. “I’m still hoping to add a few shows along the way,” Gardiner said.

Gardiner said the idea for this type of book tour may be fairly unique. “I’ve spoken to a lot of people in the business of books while putting the tour together,” he said. “They haven’t heard of an independent writer trying to make something like this happen.

“I think Memories for Sale is great writing,” Gardiner said. “I don’t have a major publisher behind me and I have a very limited budget…..but I believe in my writing, so I thought something like this would continue to spread the word. Come on out and have a great afternoon of words and music.”