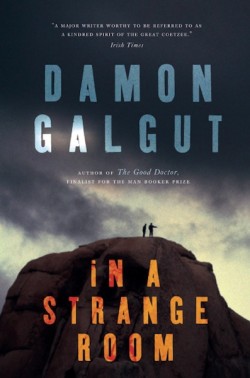 It’s Faulkner’s line: “In a strange room you must empty yourself for sleep.” I’m not absolutely sure what it means. Perhaps that’s because I, like most of you, fill my life with activity, people, places, and things, instead of getting down to hard philosophical thinking. But Galgut has emptied his room so that what is present are luminously sad insights and stirring existential questions.

Galgut, a South African, comes by the wisdom of solitude honestly. He became very sick with cancer when he was six and spent much of his childhood in hospitals where books and stories were his only companions. And like another famous South African, J. M. Coetzee, he uses himself as a character in his novels. He is so crafty; like Virginia Woolf, he changes point of view on a whim. Sometimes he is he, sometimes I, sometimes me. The Hindus call it tat tsvam asi (“you are that”). But it all works.

Galgut carries his character “Galgut” through three separate journeys. In the first story he becomes entranced by a handsome philosophical nomad. Tension and eroticism build with every page before he falls into the abyss of his own fear and detachment. The second story follows much of the same emotional terrain as he tags along with three strangers travelling in Zimbabwe and develops an intense fascination with one of them. He is left so alone and vulnerable at the end of this tale that all I wanted to do was pull him out of the story and invite him to dinner. But of course he would have declined. The last section is so wild and interesting that you will not be able to put it down until you have finished it. His detachment is blown when he allows a good friend to accompany him to India, knowing that she is at the height of a full blown manic episode.

There are so many reasons to thank Galgut. It has been a long time since I did so much underlining in a text. I keep going back and re-reading passages. And I haven’t even mentioned his reverence for the natural world, so I’ll leave you with just a few lines from this astonishing work:

He passes a horse in a field under a full moon. No other image from this journey is so rare and brilliant for him, the green of the grass like glossy plumage, the animal dreaming quietly in profile, the white circle up above like God. Surely they must be there.