REVIEW: CUT YOU DOWN 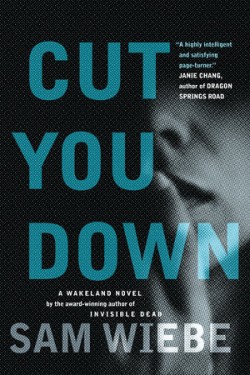 REVIEW: HELL AND GONE
Cut You Down: A Wakeland Novel
I think a lot about a late night call Stanley Kubrick supposedly made to Stephen King during the filming of The Shining, an adaptation King hates. King has described a few variations on this chat, each iteration ending with Kubrick hanging up on King. In the version I like to believe is true, Kubrick bugged King about whether or not he believed in god, then he suggested that, for all their cruel ghoulishness, ghost stories were inherently optimistic because they implied some manner of afterlife. Then he hung up.
There's a like optimism implied by murder mysteries. A horrible crime is committed and the ordered world is shaken up like a boggle box. While you can't bring someone back to life, a crafty shamus can reveal the source and reason for the chaos, uncover a neat motive, then put everything back in place. If we can't have fairness in the world, we'll at least settle for understanding and order.
Vancouver PI Dave Wakeland, hero of Sam Wiebe's Invisible Dead and its new sequel, Cut You Down, has all the makings of a savvy, no-nonsense, all-out-of-fucks beast of burden who will restore order at all costs. Indeed, his restorations in these first two books of what will hopefully be a long-toothed series are wry, deft, thrilling, and -- maybe most importantly -- satisfying stuff. As with most crime fiction, there's that tacit promise that, however puzzling the case, you'll find out who dunnit and why. The reason you'll want to keep up with Wiebe, however, is the way in which he both satisfies and complicates that generic certainty.
In Cut You Down, Wakeland, still banged up from his previous search for long-missing woman Chelsea Loam, takes a case from a textbook damsel in distress. Dana Essex, a college professor out of central casting, needs help finding a student/colleague of hers. Tabitha Sorenson hasn't been seen since she made it out relatively unscathed from a misappropriation of funds scandal at the student government. What starts out as looking like a simple mix of jejune activism and a take-the-money-and-run scheme becomes more high stakes as Wakeland susses a connection between Tabitha and an up-and-coming Abbotsford gang eager to prove itself.
For every case that ex-boxer/ex-cop/jazz fan Dave Wakeland solves, there are those that remain unresolved, those that he can't let go of, novels full of dead-ends that we'll probably never read. A bone of contention between Wakeland and his more business-savvy partner Jeff Chen is Wakeland's commitment to missing persons cases that won't budge. "The hours I'd poured into the Jasmine Ghosh case alone, with no results and no bills sent to girl's family, flew in the face of even the most obvious business sense." A stubborn commitment to the seemingly irreconcilable chaos of the world is just the sort quality you'd want in your gumshoe, but for Wakeland, the sticktoitiveness that sets him apart is also liable to tear him apart.
In his Wakeland books, Wiebe is increasingly interested in what Wakeland himself recognizes as the myopia of the sort of knight errant Raymond Chandler created with Philip Marlowe, an archetype which has since become ubiquitous. Set in a Vancouver that's becoming more and more unrecognizable, Wakeland's as likely to save every person in trouble as he is to stem the tide of gentrification. And while he might solve a case in the traditional sense, there's a feeling in these books that it doesn't amount to much in the long run. Closing a single case can feel like doing repairs on a building that's about to torn down.
Wiebe manages to pack in a profound amount of thought and compassion and criticism of the genre -- this book in particular munches on the rampant misogyny of crime fiction -- while never skimping on the joys of it. That's not to say that Wiebe is a cynical writer, though. He just doesn't taken optimism for granted. His isn't a world that begins whole and can be put back together again after it's been dropped. Here, everything is already smashed and the challenge is to make something new and worthwhile out of the detritus. Good can be accomplished, but it won't ever be easy and it certainly won't be absolute or permanent.
Go To Page Turners & Pot Boilers