REVIEW: THE WOMAN IN THE WINDOW 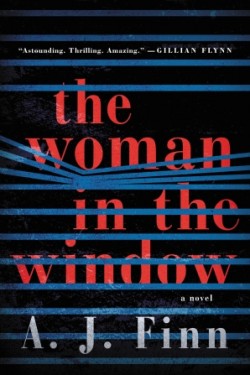 Bowing a shelf at home are a collection of Black Lizard Big Books, anthologies of classic crime fiction. Edited by Otto Penzler, proprietor of the famous Mysterious Bookshop, these anthologies are wonderful themed surveys of the vast landscape of mystery writing across time.

My favourite title in the series has to be the Big Book of Locked-Room Mysteries. An uncanny, niche genre, a locked-room mystery describes an impossible scenario in which a crime occurs in a contained space -- no obvious ingress, no obvious egress. Poe's "The Murders in the Rue Morgue" is probably the most famous locked-roomer and the recent adaptation of Agatha Christie's Murder on the Orient Express will hopefully have put that classic back on readers' radars.

AJ Finn's debut The Woman in the Window offers an interesting twist on the locked-room thriller. What if it's not the crime that's in the confined space, but the detective? An agoraphobic shut-in who orders merlot in bulk, child psychologist Anna Fox divides her time between watching venerable black and white thrillers and spying on her neighbours. If you've seen Rear Window, as Dr Fox has -- countless times -- then you know that if you look into people's windows for long enough, you're bound to see something you can't unsee.

The Woman in the Window hangs a lantern on its predecessors. Anna is as marinated in voyeuristic fare like Blow-Up and Hitchcock's Peeping Jim classic as she is wine and meds. Both the noir and the booze cocktail are important influences to bear in mind when Anna witnesses a murder in the apartment across the way. How much have her vices affected her perception? How much have they distorted her reality? If our narrator is a novel-mad Quixote, then how can we trust that the giants she sees aren't really windmills?

The isolation in The Woman in the Window is not just physical, but mental. If indeed the crime is all in her mind, then Anna herself becomes the locked room in Finn's mystery.  Of course, just by thumbing through something like the Big Book of Locked-Room Mysteries, you'd know that no room is ever safe from influence. There are always ways in and ways out and sometimes the apparent safety of isolation is even more dangerous than exposure.