REVIEW: BE READY FOR THE LIGHTNING 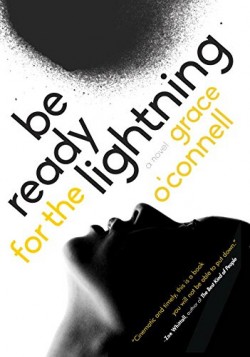 Be Ready for the Lightning
Our literature can feel an awful lot like our land sometimes -- sprawling. Not to speak ill of all the history-spanning family pieces Canadian literature has to offer, but big national books can sometimes feel like the slog north through Ontario into Manitoba: gorgeous but, you know, there's going to be a lot of dense gorgeousness, with only the Giller prize (less true as the years go on) waiting at the end like a Tim Horton's bathroom to compel you forward.
All of which is to say that we haven't quite figured out how to celebrate and elevate the tauter trips we take. For instance, Iain Reid's 2016 mind-screw thriller I'm Thinking of Ending Things received universal praise, but -- though well-reviewed and recommended reader-to-reader -- didn't stir CanLit like it should have. Contained in a single evening, during which the unnamed narrator visits her boyfriend's parents for the first time, the novel is the opposite of sprawling. Reid's 200-something pager can get downright claustrophobic in its containment, whether in timeframe or frame of mind.
Grace O'Connell's second novel, Be Ready for the Lightning, feels similarly restrained. Veda, visiting friends in New York hops a bus after a run through Central Park and soon finds herself in a hostage situation. Narratively, the novel isn't trapped in the bus, but rather the hostage situation -- and Veda's interaction with the gunman -- becomes the hub around which her past spins.
The narrative shifts back and forth between Veda's childhood, coming up with her friend group and a brother, Conrad, who increasingly proves drawn towards conflict and violence, and matters on the bus. In juxtaposition, the crisis keeps the history from being tedious and the history ennobles the crisis, and the more these two sections talk, the more the book becomes a conversation about maturation and -- as J.M. Barrie's Peter Pan is introduced -- about "lost boys".
Taut and thoughtful, light and heavy all at once, patient and sure in its self-revelation, Be Ready for the Lightning feels like another step forward for popular CanLit. It may not take the country by storm, might not appeal to those readers who like the long drive reads our country has heretofore been great at producing, but that doesn't seem like its ambition. Like its narrative, the novel's ambitions feel contained, O'Connell confidently concerned with exploring her select store of themes and ideas.
Go To Page Turners & Pot Boilers