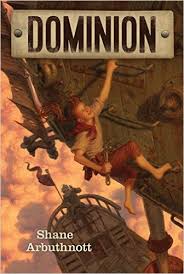 Shane Arbuthnott is a Guelph-based author. His new novel, Dominion, is a pre-teen steam-punk adventure.

Jeremy Luke Hill – Talk a little about the reasons you ended up writing a steam-punk sci-fi novel for a pre-teen audience. Is this more or less the genre you set out to write, or was it just how the subject of this particular novel developed?

Shane Arbuthnott – When I started the book I knew it would be fantasy for young readers, but I hadn't set out to make it specifically steampunk. The genre came out of the alternate history I created: the magical spirits are first discovered during the Industrial Revolution. So with steam-era technology and magic mashed together, I ended up squarely in steampunk territory.

Though I didn't specifically think, "I want to write a steampunk novel," I'm very glad Dominion went where it did. Steampunk, as a genre, has an excellent way of making fantastical things feel real. The details of the machinery and the focus on social conditions keep the narrative grounded even when your characters are on an anti-gravity sailing ship far above the clouds.

In the very earliest drafts, I actually alternated chapters between modern times, with Molly Stout in the lead, and the story of Molly's ancestor Haviland Stout who discovered the spirits. But as the writing went on, it became clear that it was Molly who was driving the story, and she should be the focus.

JLH – One of the difficulties in writing adventures for youth is that you need to separate the protagonist from her parents in some way in order for her danger to feel immediate and her decisions to feel real. Describe how you dealt with this problem and why you took that approach.

SA – I considered making Molly an orphan, which is usually how this goes. But family relationships always fascinate me, so in the end I gave Molly a widower father who is distant and alcoholic. Molly had to raise herself, despite having a family around herself all the time.

That decision made everything so much more complicated, in a way that was both a pain and a joy to write. It's also what made Molly who she is: independent, strong, and sometimes reckless, but still very much interested in relationships with other people. She loves her family, but knows she can't always rely on them. As she gets better at taking care of herself, she also gets better at charting out her own place in her family.

JLH – Every author dreads the question about what inspired the writing of a book, but I really am interested to know how you came upon the idea of a world where machines were powered by captured spirits. Is there a story here?

SA – Before I wrote Dominion, I had been musing about common themes in fantasy. One that comes up pretty often is that magic is ancient, and as science rises magic fades. I wondered what would happen if, instead, magic was a modern discovery. The answer I came up with, as you see in the book, is pretty sad: magic becomes another commodity, and only increases inequality. The poor are just as destitute, but the rich get to live in literal castles in the sky.

After that, it's hard to say where the world came from. I just piled ideas on ideas, and saw which ones fit together.

JLH – YA novels have increasingly appealed to older buyers and readers over the past few years. How much did you have that in mind as you were writing this book? Did you have an older audience in mind also, or were you primarily focusing on addressing it to young adults?

SA – I wrote this book because it's the kind I like to read, so I certainly had older readers in mind as well as younger ones. And I didn't hold back on making the story and characters complicated, but that's not just for the older readers. One of my favourite children's authors, Diana Wynne Jones, pointed out that kids are generally sharper readers than adults–they pick up on details that older readers will miss, and they don't tend to forget as quickly. So when I'm writing for younger readers, I aim for clarity but not simplicity. And I think that kind of writing is appealing regardless of your age.

JLH – I know that you're the primary caregiver in your house most days, as am I. How does this change the way you write? How do you schedule around that? How do you adapt your writing process to family life?

SA – This is always, always hard. I think I can only manage it because I married a wonderful, supportive woman who was willing to prioritize my writing long before I actually sold my first book.

Trying to balance parenting and other goals is always a juggling act, and made harder by the fact that I'm a morning person. By the time I tuck my kids in, my brain is running on fumes, and writing does not go smoothly. Mostly that means I write in very short sessions. Dominion was largely written between 5 and 6 am, because everyone was (usually) still asleep then. Nowadays I get a few mornings a week to do my work. I have to be flexible, and take what time I can get regardless of how long it is. Half an hour is enough time to do good work, though it can take some time to get used to writing like that. I just keep adding small pieces until it adds up to a novel.

JLH – I see the influence of different media in your book (or think I do). What are the books, films, video games, and so forth that have provoked you creatively, not necessarily the ones you like best, but the ones that added something significant to your imagination?

JLH – Oh gosh, that's a huge question. How many pages can this interview span?

I love stories in all forms, and I try to take in as many as I can. That does mean books as well as movies and video games. And I've never been good at pinning down my "influences" because there are too many to name.

Charles deLint is one I think of often, because his books were the first urban fantasy I read. The combination of fantasy and a world recognizable as our own is very powerful to me. Having those familiar touchstones makes the magic all the more magical. On the other hand, Diana Wynne Jones' books remind me that as exciting as the world-building and fantasy elements are, it's the characters who keep the reader engaged. Make a strong protagonist, and they'll carry the story forward for you, as Molly did in Dominion.

Outside of books, I'd say Bioware's games are a big influence. They create wonderful characters, and give them such distinct voices, that I'm always inspired by their dialogue work. I sometimes daydream about going to write for them, but I'm not sure I have the chops to write those big, branching narratives.

JLH – It's become standard for YA novels to appear as a series, and I know you do have some sequels planned. Do you know yet how long you anticipate the series to be? Do you have a completed story arc in mind, or is it still developing?

SA – Well, the second book is largely complete, and undergoing revisions. It's called Terra Nova, and it will be out next year. Beyond that, I'm not sure yet. I have a potential third book in mind, but I try to make each book come to a satisfying conclusion on its own, and the two books tell a nice story between them. And I have dozens of other stories in my brain, clamouring to be told, that may draw me away from the world of Dominion. I haven't decided yet where to go next.

JLH – When you're finished with this series, will you continue to work in a similar genre, or do you have other things you'd like to write also?

SA – I suspect I'll be working in fantasy for young readers for a very long time, if not forever. These are the books that still hold my heart. I want to put more of them into the world.