REVIEW: THE SENSE OF AN ENDING 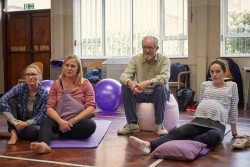 I didn’t think I would like Ritesh Batra’s (The Lunch Box) adaptation of Julian Barnes’ Man Booker winning 2011 novel. When I read the book, I couldn’t sympathize with the narcissistic and aging curmudgeon who is drawn to revisit his past through a cryptic inheritance. I wondered why it won the prize. However, so skillful and realistic is Jim Broadbent’s portrayal of Tony Webster, that I gained greater insight into this story. Broadbent’s quizzical stance, even as his character is at his most obtuse - neglecting his pregnant daughter, is not only engaging but makes us realize that the man and his culture are simply not up to the job. But he does try and the thoroughly brilliant ensemble case, led by Charlotte Rampling and Harriet Walter, don’t give him a moment’s reprieve. His final realization is that he has lived his entire life informed by misguided suppositions and wilful ignorance. There, but for the grace of god, go we all.