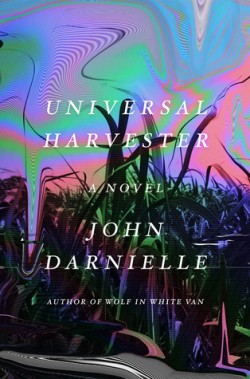 You give a magician a $20 bill knowing that it will be destroyed or altered in some way with the trust -- a trust usually marbled with suspicion -- that your bill will be restored in the end. Similarly, as a reader you hand over your valuable time and attention to a mystery or thriller (or whatever other plot-driven genre you're into) because there's a tacit promise that the mystery -- the whodunnit or the whatisit -- will be solved. You suspend your disbelief, and hand over reality to be torn up or lit on fire or swallowed, trusting you'll get it back whole and still worth something again.

John Darnielle's Universal Harvester concerns a literally mangled reality. Some of the VHS' in Nevada, Iowa's Video Hut stock are being tampered with. The glasses-shaming teen drama of She's All That, for instance, is interrupted by four minutes of "a black-and-white scene, shot by a single camera, mounted or held by a very steady hand," just the sound of "a little wind across the camera's microphone, the audible rise and fall of a person breathing." Over time, more corrupted tapes surface and, when tallied, their clips hint at a broader story. Jeremy, a twentysomething clerk at Video Hut, who is still in a holding pattern after the loss of his mother, Sarah Jane, the store's owner and Stephanie, a customer who first discovers the grafts in her rented copy of Targets, set out to solve the mystery of the tapes.

Darnielle -- best known, under the name The Mountain Goats, as one of the most lauded songwriters on the 21st century, though increasingly making a name for himself as a novelist, with his first novel, Wolf in White Van, longlisted for the National Book Award -- hits the ground running. The mystery of the tapes is introduced immediately, right along with Jeremy, so the reader can't be blamed for assuming that this is our hero, cracking the case his task. Off the bat, Universal Harvester has all the makings of a rip-snorting thriller, and if it were to fulfill the expectations of its first few pages, no doubt it would be a cool, creepy read. But then, like weird footage spliced into a teen comedy, Darnielle slips a first person "I" into a narrative voice we've so far assumed is omniscient third person, and we're suddenly wondering if we'll ever see our twenty bucks again.

Onwards from that appearance of the mystery "I," the straightforward creepy mystery trajectory gets increasingly complicated and subverted, until the reader has to make a peace with the fact that simply solving of the mystery isn't the point of Universal Harvester. Instead, Darnielle uses the mystery as means of exploring the more serious and nuanced themes of loss and death -- death seeming to be that titular harvester.

As more and more reviews for this second novel come in, it's clear that not everyone appreciates Darnielle's legerdemain. Readers unable or unwilling to recalibrate their expectations are certainly apt to be letdown. But those game for the twists and turns of the story are finding that they not only get their $20 back, but that the initial bill's been transformed into a hundo.