REVIEW: HOMESICK FOR ANOTHER WORLD 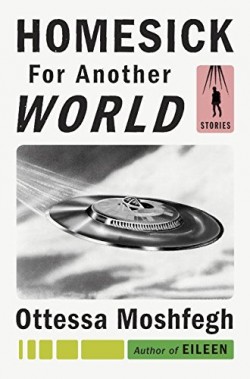 REVIEW: MY YEAR OF REST AND RELAXATION
REVIEW: DEATH IN HER HANDS
Homesick for Another World: Stories

“Fiction is about everything human and we are made out of dust," wrote Flannery O'Connor in one of her most notable quotables, "and if you scorn getting yourself dusty, then you shouldn't try to write fiction.”

A devout Catholic from the Christ-haunted South, O'Connor was speaking quite literally. For her, we are literally Lord-formed from the dirt. With this imagery, she casts the author as a handler of essences; she positions them with the Creator, a figurative proximity that, in and of itself, is neither groundbreaking nor especially sacrilege. In fiction, the writer is a world creator and world populater and so on and so forth. But more than just a forger, O'Connor extended her divine-esque duties to the role of judge. As dusty as her writer's hands might have been, they were just as bloody.

Give your reader a character to root for and love and don't judge every single one of your characters equally are the sort of platitudes that get floated to young writers, and they're about as useful as water guns on a hunting trip. A writer of fiction always decides the moral rubric of their fictional universe and doles out the comeuppance as they see fit. O’Connor’s writing can be compelling for just the extent to which she‘s hard on her unredeemmable, unlikeable characters. In her role as Writer God, she may love her sinners, but that love doesn’t excuse them from the meat grinder of their behavior’s consequence. And that begs the question: how do you root for a character you know is screwed?

There's a horror movie's certainty in the stories of Flannery O'Connor; they’re wonderful killing jars. Justice will be reliably meted. Sometimes that judgment can seem Jobishly undeserved, but for the most part it stickles to the divine balance. In her Catholicness, O'Connor can be inimitably brutal. But she is never didactic; O'Connor might show the consequences but she doesn't explain them. Because the stories rarely announce their Catholicism, secular readers will be oblivious to the moral authority standing in judgment of these dust people. And so, without that religious framework, O'Connor seems to write intimately and joyfully of haughty deviants who find themselves at the receiving end of almost comic brutality.

Comparing a new author to a venerable one is, by and large, lazy and frivolous PR stuff. Not every writer (or any writer) who mixes blood and thunder with Old Testament poetry is the new Cormac McCarthy. (Plus, McCarthy is still alive and writing; we don't need a new one, thanks.) Nor is an author who writes a dense, cheeky, thoughtful tome the new David Foster Wallace. However, the jacket copy declaration in Homesick For Another World that Ottessa Moshfegh is "our Flannery O'Connor" does shed some interesting light on what makes this 2016 Man Booker shortlisted author so compelling.

Ottessa Moshfegh has a comparable authorial disdain for her characters. Like O’Connor, she judges and sort of condemns them. They are of her making and that’s her right. Whether in an omniscient voice or the characters’, she tells you that they gross inside and out. They see themselves as ugly people in an ugly world. Even still, they consider themselves deserving of love and connection. And just as sure as you know O’Connor will punish her characters, you know Moshfegh will deny hers that redemption, that connection. But she also denies outright punishment. While O'Connor is a meddling god, Moshfegh doesn't intervene. A presence that's felt but isn't experienced makes up cosmology of the stories in Homesick For Another World. You never forget for a second that these are Moshfegh’s characters in Moshfegh’s world.

In her confident portrayal of these casually duplicitous, often scuzzy people, Moshfegh reads like a secular O'Connor. She has that Lupus-napped Southerner's knack of making deplorable people loveable, for making their depravity accessible and worth visiting. You don’t root for her characters, you’d be remiss to like them, but as they’re built and set loose into the world by their author, you find things to love about them. Their hideousness is always a pure, tangible human hideousness.

“There, but for the grace of God, go I,” even people who don’t believe in God tend to say. If you can perceive the suffering and inelegance of others and know that you’re not yourself exempt, then you should read both O’Connor and Moshfegh.

Such a particular talent isn’t lost on Moshfegh herself: "The affection many people have for my writing strikes me as similar to the affection they might have for cronuts," she said in an interview with Vice "—those ten-dollar donuts, or whatever the next low-brow meets high-brow fad food is. Eating cronuts makes us feel like we're slumming without actually having to eat like we're poor. It happens all the time. Like gourmet corn dogs, this obsession with bacon. My writing lets people scrape up against their own depravity, but at the same time it's very refined—the depth of it hides behind its sophistication. It's like seeing Kate Moss take a shit."