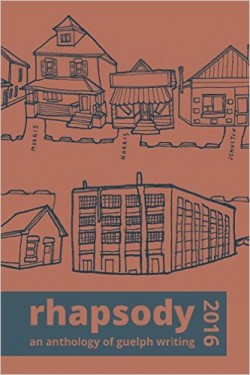 Rhapsody 2016: An Anthology of Guelph Writing “is a celebration of local writing,” as well as a testament to institutions such as Vocamus Press whose ongoing efforts support Guelph’s literary scene. Vocamus has published three Rhapsody anthologies—one per year since 2014—that each gather twenty-or-so poems that range widely in form and theme, but share in common that their authors are affiliated with Guelph. Through their inclusion in the Rhapsody project, these writers are contributing to an impressive local literary culture that is supported by publishers, bookstores, the university, artistic collectives, and other like-minded organizations.

Also important to the city’s literary ethos is an involved readership that makes time between the award winners and the classics to engage with contemporary local writing; in doing so they bring to life the timely and engaging ideas penned by their neighbours. To attend to a neighbour’s creative output is in and of itself an act of care for one’s community, but readers of this collection are also enriched by poems that address various social, political, and artistic concerns. This amounts to Rhapsody anthologies worth reading both because of their poems’ merits and because they provide the reader an opportunity to participate in Guelph’s necessary and exciting literary scene.

While most poems in Rhapsody 2016 are not about Guelph, some certainly capture the way the city feels at times. For example, the speaker of Paul Hoy’s poem expresses the relatable sense of fatigue caused by driving on local roadways: “tired of these directions, the lights on Hanlon, / the salt trucks on the 401.” Then there is Adrien Potvin’s energetic poem about a street fight that epitomizes the darker side of the city that emerges in the early-morning hours when the bars let out. Of course, Guelph is more than the struggle of its human actors; it is worth looking to plants, animals, and “Ruffled face of pond,” as Kathryn Edgecombe’s poem reminds. Such reflective poems prompt an appreciation of the city that extends beyond self-congratulation.

Other poems in the collection are also contemplative, often serving to empower the self and others. Rob O’Flanagan’s contribution, “Grief Walks With You,” encourages its readers to make use of the love that is found in grief. Hanna Peters’s poem also evokes a sense of resilience. In Peters’s “The Balcony Tenant,” the speaker looks with sadness to a pot that once held a plant and now holds used cigarettes, but despite their troubles the speaker and the pot endure. By turning to contemplation and introspection to find self-preservation and love, these poems encourage readers to engage thoughtfully with the world.

Then, there are many phrases that force the reader to give pause for their ingenuity. Take, for example, Nina Kirkegaard’s “One ticket please / To sightsee your mind,” James Clarke’s “I am your designated dreamer,” Bieke Stengos’s “and sea creatures / beach themselves / as if they believe / life on solid ground / could save them,” and Jayelle Lindsay’s “I was so upset once, I stepped on every crack / on the way to school.” Here are a few of the many lines and poems that I am drawn toward for their aesthetic qualities, or because they are at once somber and uplifting. I expect other readers will gravitate toward these poems for other reasons, or to different poems entirely. To do so would breathe even more life into Rhapsody 2016, which is a welcomed contribution to a vibrant and unique local literary culture.