Disloyal: A Memoir: The True Story of the Former Personal Attorney to President Donald J. Trump

The Inside Story of the Real President Trump, by His Former Attorney And Personal Advisor-The Man Who Helped Get Him Into the Oval Office. Michael Cohen knows where the skeletons are buried.

Lights! Camera! CanLit!: A Regular Gal at the Giller Gala 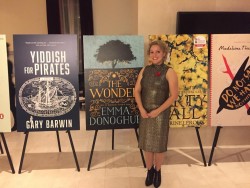 Bookshelf Advent: 24% off 24 Notable Books
Do Not Say We Have Nothing
The Wonder: A Novel
Yiddish for Pirates
The Best Kind of People
The Party Wall
13 Ways of Looking at a Fat Girl

There is something magical about the annual Giller Prize celebration. This is my third year attending the soiree and dammit if the shine still hasn't gone off the thing. As our taxi pulls up in front of the Ritz Carlton Hotel, its massive second-storey window shimmers with strand upon strand of twinkling lights, at once glamourous and festive. The giddy buzz and hum of guests and attendants is palpable - there cannot be fewer than 100 people in the lobby when we first arrive - black ties, courteous gestures, the sweep of a sparkling wrap over a bare shoulder. What feels like a particularly dashing night at the opera is, in fact, an evening honouring cultural achievement of a very different sort.

While the Junos, Genies and Canadian Screen Awards recognize the best in performance art, the Giller Prize focuses its attentions on a group of artists more likely to run from the spotlight than to embrace it: fiction writers. Not all storytellers fit the stereotype of the reclusive typewriter-mashing cabin-dweller, but it's unlikely that many would list "fame and fortune" among their top motives for doing what they do. Although Canada is hardly unique in offering a prestigious award to its most esteemed fiction writers, it is marvelous to witness such a spectacular award ceremony dedicated to the book world!

The ballroom of the Ritz was packed to the edges with guests numbering at nearly 500, plus staff, television crew and their equipment. A lot of technology goes into this hour long broadcast, the long-armed video cameras repeatedly gliding over the audience not unlike the claw in a toy vending machine. With each sweep, we sat in enraptured anticipation to learn what lucky table would be plucked from the crowd and aired on the live broadcast! Sadly, readers, I was not among the chosen, but that didn't make my beef tenderloin dinner any less delicious!

Steve Patterson did a brilliant job as the evening's host, keeping the mood lively and jovial, despite the dark spectre of a terrifying American election looming in the imminent future. If anything, the plight of our neighbours south of the border provided some of Patterson's best material, including an assurance that unlike other voting scenarios, the Giller selection process was guaranteed not to be "rigged."

If I had a single criticism of the night it would be this: One of my favourite parts of my previous Giller experiences were the comical pre-filmed Q&A's conducted between the host and the nominees. For the 2016 ceremony, however, the affecting introductions made by the presenters were instead followed by segments featuring evocative graphics and morose voiceovers. Perhaps this new approach was intended to focus on the book rather than the author, but while I appreciate any new stab at the old chicken vs. egg debate - in this case, which came first, the story or the teller? - these videos had a less accessible feel to them that didn't seem to connect very well with the studio audience and perhaps didn't translate as effectively to the television broadcast.

That being said, the night was not without its share of laughter and entertainment, particularly some inspired funny bits featuring Bob Rae and Margaret Atwood, respectively.

Thank you to ScotiaBank and to Jack Rabinovitch for a dazzling, memorable evening. A big congratulations to all of the excellent finalists, and especially to the very deserving Madeleine Thien for Do Not Say That We Have Nothing!