RT @MichelleObama: It's about that time when New Year's resolutions get a bit harder to stick to. To offer a little inspiration, I wan… t.co/b6lQJJELDi

Review: Waiting for First Light: My Ongoing Battle with PTSD 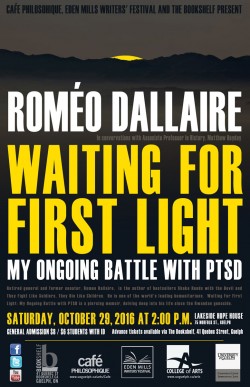 Waiting for First Light: My Ongoing Battle with PTSD
Shake Hands with the Devil: The Failure of Humanity in Rwanda
Forced to Change: Crisis and Reform in the Canadian Armed Forces
They Fight Like Soldiers, They Die Like Children: The Global Quest to Eradicate the Use of Child Soldiers
Old Enough to Fight: Canada's Boy Soldiers in the First World War

Over the past couple of decades, it has been satisfying to note that people are becoming more accepting and compassionate towards those experiencing mental illness. While there is still much progress to be made, at least more people are willing to talk about this issue. The challenge of de-stigmatizing this last taboo will be helped significantly by the impending release of Romeo Dallaire’s new book Waiting for First Light: My Ongoing battle with PTSD.

Romeo Dallaire has led a fascinatingly productive and varied life. First Light covers his experience as the commander of the UN forces in Rwanda during the genocide that took place during the mid-1990s. The UN peacekeepers had very few resources and very little political support from the UN to stop what turned out to be a series of seemingly unending atrocities: child soldiers, mass rape and murder, starvation, and dehydration. As a result of the horrors he witnessed as a soldier, Dallaire developed Post Traumatic Stress Disorder.

He compares his experience with PTSD to that of a soldier who has lost a leg in battle, or someone who requires a kidney transplant; consequently, he is an advocate for both therapy and medication. There is a growing colloquialism in mental health circles asserting that if you had diabetes there would be no stigma for taking your medication, and thus there should be no such stigma for taking medication if you have a mental illness.

Why is this book important to creating a more robust mental health system in Canada? Romeo Dallaire is a retired Lieutenant General in the Canadian Military, he is a former Canadian Senator, humanitarian, and bestselling author who has struggled with this ailment for over 20 years. He has persevered in spite of his terrible injury. Since his return from Rwanda, he has been a tireless advocate for justice, and preventing these atrocities from happening to those in the world who often have very few resources. He contends that the military has a moral obligation to those in the world who most need help, not simply to the advancement of its own foreign agenda. I agree with him wholeheartedly.

He is not only an advocate of fair treatment for the military. A memorable quote near the end of the book states:

“Our veterans (of the military, but also of all the first responder professions: police, firefighters, and medical personnel) have committed themselves to a higher calling, and we need to recognize their commitment to a manner that is worth of importance. I believe that what is needed is a cradle-to-grave covenant that assures protection and healing not only to the physically injured but also to those morally injured in the line of duty. I propose a continuum of care that will help them to reconcile their current lives with the terrible experiences that created their injury, and allow them to rejoin society with confidence and serenity”.

This is one of the most important non-fiction books to come out in 2016. It is well written, and it truly helps to break down the misconceptions surrounding mental illness.

Romeo Dallaire will be appearing in Guelph on Saturday, October 29th at 2:00 pm at Lakeside Hope House for the latest installment of Cafe Philosphique. He will be in conversation with Associate Professor of History Matthew Hayday. Tickets are available at The Bookshelf and are $6.00 for students and $8.00 for adults.