Congrats to all teens who gathered for the sex-ed protest Friday!


A fun time was had by all! Thanks @ConestogaC @CStudentsInc for having us! Remember to register your complimentary… t.co/9JVzhgDvrp


Hello @ConestogaC swing by the Guelph campus and see Mel in the cafeteria for your FREE @Bookshelfnews membership a… t.co/hlGvVVxR93 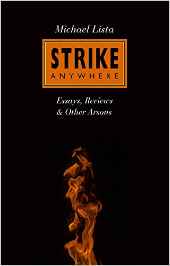 Michael Lista admits in his introduction to Strike Anywhere that books of collected essays and reviews are a pretty low form of literature. God knows it's true. They're too often dated, taking up issues that were only barely interesting at the time and are no longer interesting at all. They have a tendency to wallow in past public spats – a literary form that always ages poorly. Worse, they usually end up trying to force some artificial unity onto a group of occasional pieces that were never really meant to bear it.

In Strike Anywhere, however, Lista mostly manages to avoid these pitfalls. The essays and reviews take on writers who are either contemporary enough or canonical enough to be relevant. They rarely reference any literary bickering, falling only once to the temptation to include an essay's literary fallout as an addendum. Better, they're consistent enough in their critique that they generally do support the larger argument that ties the collection together, which might be summed up (if you wanted to be simplistic about it), as the idea that poetry is best when it's not trying too hard to be useful.

I don't really accept this premise in the unqualified terms that Lista sometimes articulates it – "Poetry is worth a damn because it isn't good for anything" (16) – but when he critiques the failure of poetry that has "pretensions to utility" (17), it's difficult not to cede him the point. There is unarguably far too much poetry – even by very well-regarded writers – that fails because it tries so hard to "redress injustice, solve the problems of language's incommunicability and advance our careers" (16). Whether or not we agree that "poetry's power lies in its uselessness" (156), a question that will probably have a great deal to do with how we define utility, we have all read (and some of us written) too much of the poetry he describes to disagree with him too far.

Despite the subtitle, Essays, Reviews, and Arsons, and despite an introduction that describes the book as compiling the writing that immolated Lista's once "nice little career in Canadian letters" (11), Strike Anywhere actually avoids being overly controversial. Sure, Al Purdy, Leonard Cohen, Tim Lilburn, and some other names come out looking poorly, but even if you have reason to enjoy these poets (which I do, for all three, to one extent or another), Lista's critique of their work is at least articulate and consistent with his theory of what poetry should be, and it offers a place to have an ongoing conversation about writers and their writing. In other words, it does just what good criticism should do. It may be controversial to some, but it really shouldn't be.