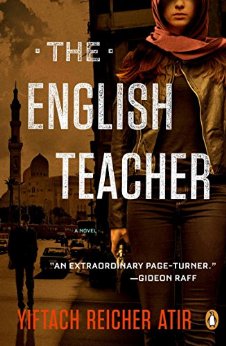 On the cover of The English Teacher, Gideon Raff proclaims that it as “an extraordinary page-turner," a promise that has occasionally left me disappointed. Teacher is a translated Israeli novel unfamiliar to me, and since I had no idea who Gideon Raff was, I decided to do some research. As it turns out, he wrote the Israeli television series Prisoners of War, upon which Homeland was modelled. I am now indebted to Gideon Raff for not only inspiring one of my favourite television series, but also for introducing me to Yiftach Reicher Atir!

Atir is a retired Mossad Brigadier General and Teacher's introduction states that his writing is based on first hand experience as an intelligence officer. These experiences must be one of his secret weapons as the amount of detail in every scene speaks volumes. The story is deliciously complicated, beginning at the end with Rachel, an undercover agent trying to escape her handler and, indeed, all of Mossad. After killing a German scientist, she wants to shed her spy skin and decides to seek out an Arab ex-lover whom she knew many years ago. To complicate things even further, her handler (who is old enough to be her father) loves her, which is not a relationship that Mossad would condone.

Writers of spy novels are often compared to John Le Carre, but in the instance of The English Teacher, I am confident in that comparison. Atir’s characters are complex and imperfect, much like Le Carre’s. The antagonists created by both writers are never singularly evil or one dimensional. Refreshingly, the work of Le Carre and Atir frequently allows us to feel the loneliness of the undercover agent, and to see how futile the messy world of espionage really is. Highly recommended.