Conflict and Compromise: Politics and Planning in Guelph 2000-2015 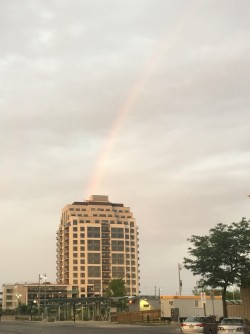 Conflict and Compromise: Politics and Planning in Guelph, 2000 to 2015

Between 2000 and 2016, Guelph has grown by about 20,000 people. During that period, many decisions have been made by city staff and council on how to guide growth in the city. A lovely aspect of democracy is being able to elect councillors whom you believe represent your idea of the ideal future. Not surprisingly, there has been a lot of debate about what the ideal future looks like.

“Fred Dahms is Professor Emeritus, founding member and former Chair, Dept. of Geography, University of Guelph and former Acting Dean, College of Social Science. He was also a Member for 11 years and Chair of Gueph's Planning Advisory Committee”. He has written a fascinating book on the politics of Guelph. Conflict and Compromise looks at hundreds of decisions that have been made from 2000-2015. Fred stopped by The Bookshelf the other day and we talked Guelph politics. Here is what he had to say:

You cover the bulk of the major decisions that have been made in the City of Guelph in Conflict and Compromise. The philosopher George Santayana, once said “those who do not remember the past are condemned to repeat it”. Did this concept figure into your decision to write the book?

Yes indeed! Unfortunately one group of councillors remembers and resents decisions taken before they were elected, while another supports earlier decisions and would like to continue governing as in the past. This attitude has resulted in bitter debate and acrimony at many council meetings, both before and after the last election. Some councillors desire to deviate considerably from past decisions, while others want to continue as before. This has often resulted in 7 to 6 votes on important issues.

Since the last election, I have seen numerous struggles between repeating the past and changing it. Sadly, this activity mirrors that of successive councils since 2000. “Plus ça change, plus c'est la même chose.” The history of Guelph politics during the last 15 years has been the struggle between those who want to preserve the environment and Guelph's unique qualities, and those who are obsessed with lowering taxes, whatever the consequences.

Fortunately, in many instances compromises have enabled some councils to achieve both. Such activity continues, but the sometimes bitter debates have often delayed essential decisions far longer than necessary! On occasion councillors have devoted too much time to defending their entrenched positions rather than finding solutions that benefit the majority of Guelph's citizens.

I am pleased that Guelph has remained a "Green" city in many respects. The city has been very careful to prevent new developments from harming the environment and has adopted excellent policies to protect wetlands and sensitive natural areas. Their progress toward a "more open" government has been good. The construction of the new Guelph Museum was an excellent example of cooperation, as was the development of the splendid new City Hall Square. The almost total eradication of our termite infestations has been a great success, as has Guelph's solid waste recycling programme. The introduction of rolling bins for waste was met with considerable opposition, but has now been accepted. Despite sometimes rancorous debate, council has usually agreed upon residential tax rates that were reasonable and adequate to finance normal development. Unfortunately, these were often too low to cover the increasing costs of improving our crumbling roads and rotting underground infrastructure. Regrettably, even after years of discussion and a demonstrable need, a new central library has never been built.

Any city moving from a small to medium sized city can be challenging. Guelph broke through 100,000 people milestone near the end of the last century. Investments need to be made to provide the infrastructure for an increasing population. Some of these investments require large amounts of capital. Making these investments can be anxiety provoking for many, especially for those who are fiscally conservative. How do we work together as a community to ensure a bright future?

City councillors will have to moderate their fixed political views and try to make decisions that will benefit everyone in the city. Rapid growth costs a lot of money for roads, social services and policing, as well as for schools and infrastructure such as water and sewage treatment improvements. Those who were elected on platforms of cutting or keeping taxes low must recognize that growth (which many support) costs a lot of money, and that taxes generated by new housing may not cover these costs. Councillors who push additional "frills" such as additional recreation centres must recognize the costs of growth and its impact on city budgets.

Ultimately everyone, including business people who desire rapid growth, environmentalists who want to preserve everything and councillors with fixed political agendas must discuss all these issues and compromise on some fiscally responsible "middle ground". Council must continue to invite the public to participate in the annual budgeting process and listen carefully to proposals to cut “waste” as well as to those suggesting additional facilities. Council will have to provide sound evidence to convince everyone that we must spend much more to repair and maintain our deteriorating sewage, water and drainage facilities. They may be invisible, but they must be repaired before costs become outrageous; everyone must understand this if we are to make the necessary investments for the future! We cannot continue to provide services for new developments while neglecting the century old infrastructure in much of the city.

I’ve been a keen observer and sometimes and commentator on elections for a long time. Fear, xenophobia, sexism, racism and divisive politics are the order of the day south of the border right now. This is the strategy that Trump is using to try to win the presidency. How does Guelph as a community keep these strategies at bay and out of our elections and focus on community building?

Members of City council and citizen groups must moderate their public statements. The hateful blogs accompanying the last election reflected very badly on their authors as well as on several politicians. Some councillors and citizens persist in this activity. At times council meetings have degenerated into puerile verbal abuse. Some public statements and letters to the media on municipal issues have verged on slander. Personal attacks must stop and writers of some blogs must moderate their tone. Otherwise Guelph's municipal politics could sink to the level of Donald Trump et. al. Someone must challenge them if we are to avoid the kind of rhetoric now so common in the USA. Councillors must set a positive example by moderating their rhetoric at council and their public statements!

Fred Dahms will be launching his new book on September 27th at 7:00 pm at The ebar. He will be in conversation with former city councillor Ian Findlay, former Mayor Karen Farbridge, and urban planning Phd candidate Audrey Jamal. Please join us for an interesting discussion on the past 15 years of Guelph politics.