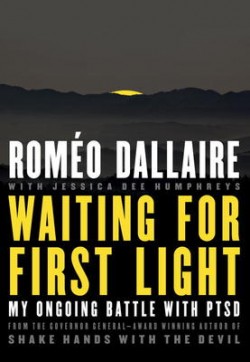 Waiting for First Light: My Ongoing Battle with PTSD

Although it’s still only mid-July, our fall events calendar is filling up fast. Fall, of course, is still the big time for book releases, with printing presses busy from now until Christmas and a multitude of announcements about long and short lists for many great awards. Here’s a bit of a sneak preview.

Your first opportunity to listen to some inspiring Canadian writers is The Eden Mills Festival, September 15 to 18. Check out www.edenmillswritersfestival.ca for all manner of details. Writers George Elliot Clark, Katherine Govier, Griffin Prize Winner Liz Howard, Helen Humphries, Alissa York, Lisa Moore and Guelph’s own Nicholas Ruddock are just a few. Also, the following Saturday afternoon you can listen to Alexandre Trudeau - traveler, journalist, film maker and yes, brother - at War Memorial Hall. In Barbarian Loss: Travels in the New China, Trudeau explores China with a young Chinese journalist and is able to spend time with all kinds of people, whose collective heart makes this huge and fascinating country happen.

On September 22 you can hear the indefatigable Maude Barlow at an event organized by the Council of Canadians and the Wellington Waterwakers. She would have been my choice as the first Canadian women represented on Canadian currency. Her newest book is called Boiling Point: Government Neglect, Corporate Abuse, and Canada’s Water Crisis. This event is quickly followed by an evening organized by The Bookshelf, Café Philosphique and The Eden Mills Writers’ Festival on September 27 at Lakeside Hope House featuring novelists Gail Anderson-Dargatz, Stephen Price and Kevin Patterson.

On October 18th, don’t miss University of Guelph professor Stephen Henighan at The Bookshelf. His new novel, Path of the Jaguar opens in 1997 with Guatemala just leaving behind a 36 year old civil war. Stephen is a novelist, short story writer, journalist, and translator. His academic career has focussed on Latin American literature.

Then on October 29th we are very honoured to present, with Café Philosophique and the Eden Mills Writers’ Festival, an afternoon with retired general, former senator and one of our world’s leading humanitarians Romeo Dallaire. His book is called Waiting for First Light, a personal revelation about his struggle with PTSD. Romeo Dallaire speaks with a kind heart about so much of life in the hell of war and conflict. General Dallaire will be at Lakeside Hope House.

And on November 8th, Emma Donoghue will be our guest at Lakeside Hope House. Perhaps she will have won the Scotiabank-Giller Award the night before. She will be reading from her new book, The Wonder, an Irish novel which is apparently either about a miracle or a murder. Emma Donoghue’s books have always had excellent reviews, but after her incredible success from the movie Room, taken from her novel of the same name, and for which she wrote the screen play, her work has had an even higher profile. Again, the excellent partnership between The Bookshelf, Café Philosophique and The Eden Mills Writers’ Festival, makes this event possible.

We also have a couple of big surprises we are working that will be announced soon and I am sure that more events will be added as the fall unfolds. All tickets will be available at The Bookshelf mid-August and call us at 519-821-3311, if you have any questions!