Review: It Ends With Us 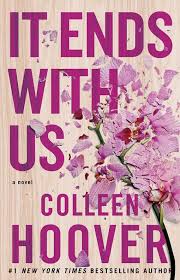 It Ends with Us: A Novel

I went into this book knowing three things about it: 1) It had a pretty cover, 2) It was a contemporary novel, and 3) It was by the much revered Colleen Hoover. Remember that age old saying “don’t judge a book by it’s cover?” Well, we all do it, but in this case I didn’t judge the book badly, I was just wildly wrong about what I thought it would be about. For me, reading this book turned out to be eye-opening and hard to read at times, but overall it was still an enjoyable story.

Colleen Hoover is a well known young adult author who usually stays within her realm of light-hearted, summery contemporary novels. It Ends With Us, however, takes some unexpectedly dark turns. Taking on heavier subject matter was Hoover's intent with this novel. In her author’s note, Hoover says, “In the past, I’ve always said I write for entertainment purposes only. I don’t write to educate, persuade or inform. This book is different.”

This book follows our main character, Lily, a hard working twentysomething who has graduated from college and found success starting her own business. Then she meets Ryle, a good looking neurosurgeon who is a bit full of himself, a bit stubborn, but sensitive too. Ryle is against relationships but he’s drawn towards Lily, who has become the perfect exception to his “no dating” rule. They both think they’ve found their happily ever after, but unforeseen things begin to happen to them. People from the past who come back into their lives unexpectedly. Lily and Ryle must battle through a self-made storm of heart ache that will put their emotions to the test. In the end, Lily must make a decision - the consequences of which will affect everyone in her life.

What makes this book so different? Hoover touches on some darker topics including homelessness, but especially on abusive relationships. Having grown up in an abusive household herself, Hoover was emotionally torn between seeing her father abuse her mother, and observing how gentle and loving her father was with herself and her younger sister. Hoover sought out her mother’s permission before writing this story, fashioning Lily after her mother, a strong willed and utterly loveable person who found herself in an unimaginable situation. Hoover is certainly not setting the standard by which all abusive relationships are measured, but she had a story that she wanted to tell, and I think she did it tastefully, all the while writing with her usual compelling style. She also shines a light to homelessness through the story of side characters, and even includes the dynamics of mother-daughter relationships while they’re being put to the test.

This book had me quite literally gasping out loud at times, laughing hysterically at some of the “Ellen Diaries” found within, and shedding a few tears when things didn’t go they way I’d hoped. I think I was more emotionally invested with this book because I read the author’s note and knew that the heavy subject matter was something that Colleen Hoover experienced, and as do many other people everyday. All in all, I highly recommend It Ends With Us to readers looking for a different type of contemporary love story, one which will challenge your thinking and yet still manage to make you laugh sometimes.