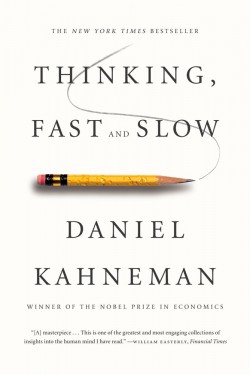 If you think of yourself as a logical and consistent person who makes good decisions, you will pick up Daniel Kahneman’s Thinking, Fast and Slow ready to be confirmed in your opinions. But if you are also prone to blushing when you make embarrassing errors, then you might want to read the book in private.

In over four hundred pages, this Nobel Prize-winning behavioural economist, trained in Psychology, has produced a remarkably readable tome. It’s as much a “how to” book as it is a theoretical discussion of the many ways we Humans fail to match up to the common assumption that we are rational agents—or Econs, a term coined by Kahneman’s colleague, Richard Thaler.

The terms Humans and Econs help Kahneman to illuminate the distinction between what he calls System 1 and System 2, the ways of thinking respectively indicated by the title of his book. System 1 runs automatically, processing information from the world around us, generating impressions, intuitions, and feelings. System 2 follows rules, compares objects, and makes deliberate choices. When System 1 runs into difficulty it calls on System 2 to provide more detailed and specific processing. But System 2 doesn’t enjoy hard work, so it’s always looking for reasons to adopt the suggestions of System 1. When this happens the impressions of System 1 turn into beliefs, and impulses turn into voluntary actions. As adept as it is in handling complex thinking, System 2 finds it difficult to learn.

Citing one fascinating study after another, Kahneman exposes our many errors of thinking and shows how they lead us to make poor decisions. For example, when faced with a difficult question, we are very good at passing off as relevant the answer to a much simpler one (heuristic questions). We also favour things we have seen before (exposure effect). Certain words prime us to act in certain ways (ideometer effect). If we like one thing about a person, we ascribe other good traits to them without having any proof (halo effect). A suggested number, even if utterly tentative, will influence a subsequent estimation or negotiation (anchoring effect). Something that seems plausible is regularly confused with that which is probable (conjunction fallacy). And the list goes on.

Even the very experienced among us are prone to these errors in thinking. The likes of mathematician John von Neumann and economist Oskar Morgenstern missed the mark when they published their seminal work Theory of Games and Economic Behavior (1944), placing utility theory at the core of the rational agent model in economics and other social sciences. Economist Milton Friedman is probably most associated with the implications of this thinking. A rational agent doesn’t need to be protected against his or her choices, so in a nation of Econs, government should get out of the way and allow people to do as they choose as long as they don’t harm others. There is no need to make a law requiring helmets or to push people into saving for their old age.

Neither is medical training a defense against fallacious thinking. In a study at Harvard Medical School, participating physicians were given statistics on the outcomes of two treatments for lung cancer. Based solely on how the statistical outcome was presented, an overwhelming majority of doctors made very different recommendations.

Fortunately, along with the list of fallacies and errors in thinking, Kahneman also demonstrates how to guard against them, covering a variety of topics:

Putting labels on our judgment errors helps alert us to them. And since it’s always easier to see mistakes when others are making them, Kahneman suggests ways to create a culture in which people watch out for one another.

Beyond showing the power of theoretical concepts as aids to better thinking, Kahneman also provides clues to gaining a better sense of well-being and—Dare I say?—happiness. After demonstrating the link between thinking fast and slow and how Humans and Econs operate, Kahneman describes what he calls our two selves: the experiencing self and the remembering self. It turns out that we tend to remember only the peaks and the ends of most experiences; this accounts for why a couple of difficult years leading to a divorce, for example, often colours our memory of what could otherwise be seen as twenty years of happiness. (By the way, to consider one’s marriage a good one, we need five positive experiences for each negative one!)

Memories are all we get to keep of the experience of living. That’s why we often call a vacation, for example, “memorable” and why we take so many photographs. The remembering self is often wrong, but it keeps score and governs what we learn from living–and it makes decisions. As Kahneman puts it, “Odd as it may seem, I am my remembering self, and the experiencing self, who does my living, is like a stranger to me.”

If it seems that the book is jammed with ideas and examples, it is. But it has a very clear structure, with just enough redundancy to help link the concepts together in a highly understandable way. The short chapters, with concluding statements that highlight the key points, also make it easy to digest and to read over a period of time while pondering the ideas or even testing them in action.

Whether you are hiring, negotiating and designing policy, or just deciding how much of a deductible to take on your car insurance or whether to buy an extended warranty on the washing machine, Thinking, Fast and Slow is sure to become a frequent resource in your library, both at home and in the office. It will pay off, literally.