RT @ShekillsLit: A great launch with a great crowd. Thanks to all for coming out on a cold night for a hot new read.… t.co/0rHrNmaWiP


Thanks for being here! Pick up your copy of #FailurewithoutFear available in the Bookshelf bookstore… t.co/tij4BSfa8Q 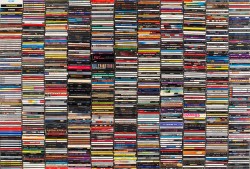 The Music Instinct: How Music Works and Why We Can't Do Without It
This Is Your Brain on Music: The Science of a Human Obsession
Musicophilia: Tales of Music and the Brain

Without a doubt, one of the defining moments of my childhood was receiving my first shipment of cassettes from Columbia House Music Club. I was twelve, and although I thoroughly loved my parents' music (and frequently made mixtapes featuring the best that the 1970s and 1980s had to offer), I was eager to get started on my own collection. Thus, when those twelve tapes arrived, I was beside myself with joy. My selections certainly reflected my tastes at the time (um, Ace of Base?!), but I also made some surprisingly inspired decisions - Billie Holiday, for example, which I chose on a whim after hearing "The Very Thought of You" in a Jamie Lee Curtis picture.

In the years that immediately followed, I became one of the Music Club's best customers. My Christmas and birthday wishlists consisted almost exclusively of album titles and I became a fiend for music acquisition, a growing problem made worse by the increased affordability of compact discs and a $20 turntable procured at the Goodwill. I listened to music constantly, but deciding what to listen to was becoming a bit of a conundrum. I would wander into my bedroom, move immediately to the stereo and then...the possibilities overwhelmed me. Making up my mind became a real struggle. I guess I could have taken the easy route, loading my five-disc changer with my favourite soundtracks and hitting "shuffle," but that simply didn't do my awesome collection justice.

For sanity's sake, my precious media has always been organized alphabetically, which gave my (admittedly neurotic) mind an idea. What if I rotated through my entire collection? If I listened to one CD, then one LP and then one tape in alphabetical order, I'd never have to make up my mind again. What's more, I could be assured that I was giving all of my beloved music equal attention!

The rotation began in 1996, and it continues to this day, although my husband did manage to convince me to relinquish my cassettes a few years ago. With few exceptions, I have wholeheartedly embraced my strange, wonderful formula and it has filled my days with an ever-changing cycle of rock, country, jazz, classical, and soul.  My husband and I have very similar tastes in music, so he (mostly) appreciates this unorthodox approach, although there are times (usually when we hit a patch of 1980s synth records) when he insists on interrupting (not stopping) the Rotation.

I have been curating the Bookshelf's recorded music section since its inception in 2012. Each week, in this column, I will discuss a selection of albums from the current rotation, exploring their personal and cultural significance within my collection. See you next week!